There was one teeny tiny corner of Earth known as GQ Magazine that, until yesterday, Taylor Swift was yet to take over. But because Swifty likes to do a job properly, she’s now landed herself right on the cover for the very first time.

GQ’s upcoming November issue sees Taylor doing the sexy thing that she often opts out of, but god 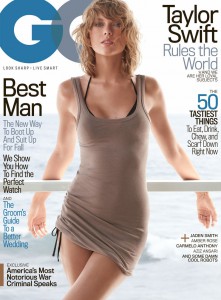 does she do it well. She’s wearing a simple black bikini, and leaning against a balcony against the ocean like some kind of glorious mermaid.

However we all know how she feels about flashing her belly button, so she’s also thrown a simple long brown tank over the top, just like you do when you leave the beach to go and do your quick magazine cover shoot.

The inside interview isn’t landing until next month so there’s no sneaky peek at what to expect, but in the preview to the cover story, novelist/critic Chuck Klosterman accurately says: “If you don’t take Swift seriously, you don’t take contemporary music seriously.”

“There’s simply no antecedent for this kind of career: a cross-genre, youth-oriented, critically acclaimed colossus based entirely on the intuitive songwriting merits of a single female artist.”​

Earlier this week Instagram released an official list of the top five popular Instagram accounts with Swift at the top, beating out Kim Kardashian, Beyoncéand Selena Gomez. As such, this makes her the first Instagram user to reach this benchmark.

She joked on Instagram celebrating the occasion, “I’m pretty sure this is just because I have cute cats though.”

To see why Swift is so damn popular watch her video for ‘Wildest Dreams’ below: