Read more
You are at:Home»News»Global News»X-Files Blu-ray boxset to be released
By Sophie McEvoy on October 8, 2015 Global News, News

The original seasons of The X-Files are finally being released in all their high definition glory, just in time for Christmas. 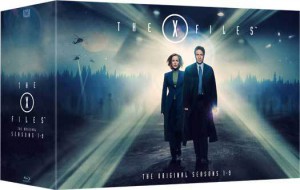 TVShowsonDVD reports that FOX are set to release a brand new boxset of the show; this time in glorious Blu-ray. The newest box set is set to be released on 8th December, slipping nicely into the run up to the new season, which is set to premiere in January of 2016.

A picture of the artwork for the complete Blu-ray boxset has been released, and it looks beautiful. It truly looks like the holy grail for any avid X-Files fan.

The DVD box sets are still available to purchase on Amazon, and the two feature films – Fight the Future and I Want To Believe – are already available on Blu-ray.

Watch the latest trailer for the upcoming revival series, which once again stars David Duchovny and Gillian Anderson as Agents Mulder and Scully, in the video below.