Read more
You are at:Home»News»Global News»Twilight is gender-swapped in new anniversary edition of the novel
By Georgia Simpson on October 6, 2015 Global News, News

In honour of the 10th anniversary of her best-selling vampire romance novel, Twilight, author Stephanie Meyer has announced a new interpretation of her debut novel which sees her lead characters switch genders. 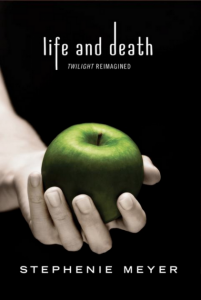 Above: The cover for the new novel (Image via Entertainment Weekly)

Yes, Bella and Edward are no more. Instead, in this new version of the story entitled Life and Death: Twilight Reimagined, Bella Swan is now a boy name Beaufort – Beau – and Edward Cullen is now Edythe, with love rival Jacob Black becoming Julie in the 442-page novel.

Meyer explains in the foreword of the anniversary edition that the gender switch was inspired by her desire to prove that Bella is not your typical “damsel in distress” but a “human in distress.”

Meyer also states that Beau is “more OCD” than Bella was and that he is “totally missing the chip Bella carries around on her shoulder all the time.”

It is well-known that Meyer was originally set to release Midnight Sun – a spin-off of Twilight from Edward’s point of view – but due to the draft being leaked online, she has since halted the project indefinitely.

Life and Death: Twilight Reimagined is available for purchase now. Watch the trailer for the hugely successful film adaptation, which starred Kristen Stewart and Robert Pattinson as the star-crossed lovers, below.