Ten years ago today, on 5th October 2005, the world was first introduced to what would become the world-wide phenomenon that was Twilight.

Twilight was the first novel in the young adult saga – followed later by New Moon, Eclipse and Breaking Dawn – and followed the story of clumsy female protagonist, Bella Swan as she moves from Arizona to the rainy town of Forks, Washington to live with her police chief father. Upon moving to a new school, she soon falls in love with a 101 year-old vampire called Edward Cullen.

The novel’s author, Stephenie Meyer, has since remarked that she was inspired to write the story after awaking from a dream which saw a sparkling vampire lying down in a meadow with the love of his life. The dream went on to become the now infamous meadow scene in which Edward reveals his true nature to Bella. 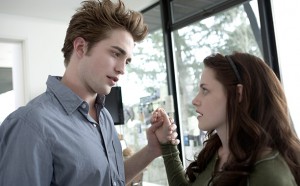 The novel received a mixed reception upon release, with some critics praising Meyer for her portrayal of the 17 year old protagonist and her feelings of isolation and rebellion. Meanwhile, others criticised her style of writing and lack of character development labelling Edward as “controlling” and “possessive.” However, the novel was instantly taken to teenage hearts and reached number five on the New York Times bestsellers’ list within a month of release before eventually reaching the top spot. The novel was also named one of Publishers Weekly’s Best Children Books of 2005.

The novel was such a success with the young adult audience – affectionately named ‘Twihards’ – that Summit Entertainment bought the film rights. The first movie adaptation was released in 2008, directed by Catherine Hardwicke and starring Kristen Stewart and Robert Pattinson in the main roles. Pattinson’s casting received some backlash from fans who thought he was not right for the role, based on what the novel had described. However, once the film came out, fans were quick to pledge there allegiance to ‘Team Edward’ and Pattinson.

Due to the success of the film (which grossed $392 million worldwide), the novel became the best-selling book of 2008 and the second biggest selling book of 2009,  behind its sequel New Moon. The novel went on to inspire a resurgence of female-targeted films, as well as the reignition of the young adult genre, encouraging the success of such popular series as The Hunger Games and Divergent.

To celebrate it’s tenth anniversary, the novel is set to be re-released with bonus content. In a statement, Meyer said: “It’s amazing to me that 10 years have passed since Twilight was first published. For me, this anniversary is a celebration of the fans, with all of their incredible passion and dedication. I’m excited to get to spend time with them again.”

Remind yourself of the film trailer to Twilight, below.