Doctor Who is getting a brand new spin-off series, made for and about young adults, called Class.

The Who-inspired drama series will be set in Coal Hill School – the workplace of several of the Doctor’s previous companions, including Ian Chesterton, Barbara Wright, and most recently, Clara Oswald.

The series – which is to be written by acclaimed young adult writer, Patrick Ness (The Chaos Walking novels) – will follow the students of Coal Hill as they battle against invading monsters and aliens.

Speaking of the new series, Doctor Who showrunner Steven Moffat said: “No-one has documented the dark and exhilarating world of the teenager like Patrick Ness, and now we’re bringing his brilliant story-telling into Doctor Who. This is growing up in modern Britain – but with monsters!” 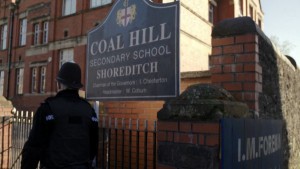 Ness also commented on his new project, stating that he was “astounded” and “thrilled” to be able to enter something as “vast” as the Doctor Who universe. “There’s so much room there for all kinds of amazing stories, and to work with Steven Moffat and Brian Minchin to find a place to tell one of my own has been an absolute joy,” he said.

“I can’t wait for people to meet the heroes of Class, to meet the all-new villains and aliens, to remember that the horrors of the darkest corners of existence are just about on par with having to pass your A-Levels.”

This is the first child-friendly Doctor Who spin-off series since CBBC’s The Sarah Jane Adventures, which ended in 2011. Another spin-off series, Torchwood (starring John Barrowman’s companion, Captain Jack Harkness) aired from 2006-2011.

Class is set to debut on BBC Three at some point in 2016. Watch the trailer for the next episode of Doctor Who below.