Read more
You are at:Home»News»Global News»Mr Smithers will finally come out in The Simpsons’ latest season
By Anneka Honeyball on September 28, 2015 Global News, News

It has been revealed that The Simpsons‘ latest season will see Mr Burns’ loyal assistant, Mr Smithers, finally come out as a gay man.

Throughout the show’s history, Smithers voiced by Harry Shearer) has always been unwaveringly devoted to his boss (also voiced by Shearer), who in the midst of all his scheming has thus far been oblivious to his executive’s true feelings. However, that is all set to change in two new episodes that will see Smithers open up to Mr Burns about his homosexuality. 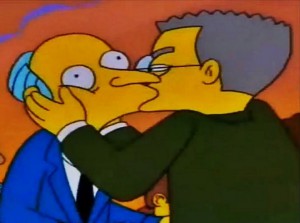 Speaking to TVLine, the series’ executive producer Al Jean said: “In Springfield now, most people know he’s gay, but obviously Burns doesn’t. We deal with that in two episodes… We actually do a lot with Smithers this year – he gets fed up with Burns not appreciating him and considers his options.”

In the past, the show’s producers have been reluctant to name Smithers as an outright homosexual, and have instead referred to him as “Burns-sexual” – in reference to the homoerotic relationship shared between the two characters – for several years.

The 27th season of The Simpsons started in the US last night, and is set to feature several guest stars including Lena Dunham, Kristen Bell, Sofia Vergara and Kelsey Grammer.

Sky One is currently airing the 26th season, with broadcast dates for the 27th as yet unclear.