It has been confirmed that sci-fi Queen, Sigourney Weaver has joined her former co-stars in Paul Feig’s upcoming Ghostbusters reboot.

The actress, who played Dana Barrett in the original 1984 comedy, has filmed a cameo for the all-female reboot. Feig announced the news on Twitter, stating: “Gang: trying to keep surprises but this is about to leak, so I’ll tell you myself: the awesome Sigourney Weaver is going to be in our movie!” It is unclear whether Weaver will be reprising her role for the new film. 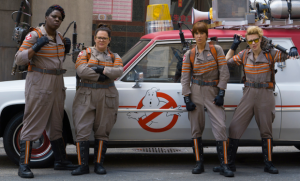 Above: The new all-female line-up. (Image via Google)

Annie Potts, who played the original Ghostbusters’ wry secretary, Janine, has also filmed a scene for the movie. With the addition of Weaver and Potts, it would seem as though the majority of the original cast will be making appearances in the reboot, with the exception of Rick Moranis (who retired from acting in 1997) and Harold Ramis, who sadly passed away last year.

Also starring Chris Hemsworth and Neil Casey, Ghostbusters is set to be released on 22nd July 2016. Watch the trailer for the original 1984 classic, below.