Following the release of their second studio album, Disclosure have announced four UK dates for Winter 2015. 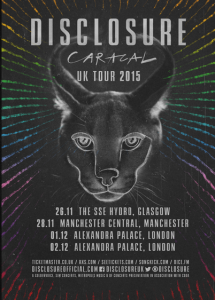 The duo will play dates in Glasgow and Manchester, as well as two nights at London’s Alexandra Palace throughout November and December. The Lawrence brothers released their second album, Caracal, today (25th September). Acting as the follow up to their 2013 debut, Settle, the new album features the likes of Sam Smith, Lorde and The Weeknd.

Disclosure’s 2015 tour dates are as follows:

General sale for the tour begins at 9am on Friday 2nd October. If you order Caracal from the duo’s official store before Monday 28th September, you can get priority access to pre-sale tickets.