Tate bosses are confident they can raise £30 million to complete funding for their new-look Tate Modern, which will open next year.

The famous art museum, based in a former power station on London’s South Bank, is undergoing a £260m revamp. When it opens next summer in June 2016 it will boast an additional 10-storey building with a panoramic roof terrace. Tate director Sir Nicholas Serota said he was “absolutely confident” the money would be found.

The new building will open to the public on 17th June, 2016. A day earlier, 5,000 school children from across the UK will attend a special preview event. Announcing the opening today (22nd September), Sir Nicholas said that the Tate Modern had been a “catalyst for change” in the UK’s attitude to arts.

“When Tate Modern first opened [in 2000]none of us could have foreseen the extraordinary growth of the audience for contemporary art or the profound changes in the way that the audience would interact with the museum and indeed with art,” he said. 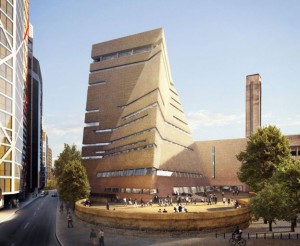 Above: How the new extension to the Tate Modern will look.

Sir Nicholas also stated that he expected the transformed Tate Modern to receive some six million visitors a year. In 2014-15 it received a record 5.7m people through its doors. The new development will provide 60% more display space and a “complete rehang” of the gallery’s artworks will showcase more than 250 artists from about 50 countries.

New acquisitions to be shown for the first time in 2016 include an installation of human hair and car bumpers by Sheela Gowda and an immersive multi-screen film by Cannes prize-winner Apichatpong Weerasethakul.

Tate bosses describe the gallery’s £260m revamp as “one of the largest cultural fundraising campaigns ever launched” with money coming from the Government, the Greater London Authority and private foundations and individuals.”

In 2006, it was projected that the new building would cost £215m at 2012 prices. The rise in costs is attributed in part to renovation works on the existing building. “They say that in London property is so expensive that you are better off building an extension to your house – so that’s exactly what we did,” said Lord Browne, chair of the Tate trustees.

Sir Nicholas admitted he’d had “plenty of sleepless nights” because of the complexity of the construction project. “We still have about £30m to raise. Both I and the trustees are absolutely confident that we will raise those funds. We’ve got a pretty good record of completing the fundraising for projects that we set out on.”

Tate had record-breaking visitor figures of 7.9 million for the year 2014-2015. The figures, revealed in Tate’s annual report, apply to its four galleries: Tate Britain, Tate Modern, Tate Liverpool and Tate St Ives. The statistics mark a resurgence after 2013-2014, when visitor numbers fell to 7.03m from 7.74 million.

Learn more about the Tate Modern from The London Story below: