The novelist and glamour icon, Jackie Collins has died at the age of 77, following a lengthy six-and-a-half year battle with breast cancer.

In a statement, her family said: “It is with tremendous sadness that we announce the death of our beautiful, dynamic and one-of-a-kind mother.” 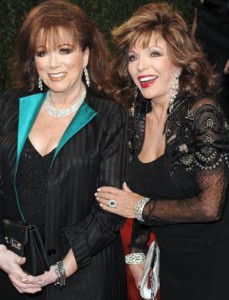 Collins sister, Joan is “completely devastated” at the loss.

“She lived a wonderfully full life and was adored by her family, friends and the millions of readers who she has been entertaining for over 4 decades. She was a true inspiration, a trail blazer for women in fiction and a creative force. She will live on through her characters but we already miss her beyond words.”

Actress, Joan Collins also stated that she was “completely devastated” at the loss of her younger sister. “She was my best friend. I admire how she handled this. She was a wonderful, brave and a beautiful person and I love her.”

Collins’ began writing as a teenager, concocting racy tales for her schoolfriends. She later developed this talent into a glittering 40 year career, in which she sold more than 500 million books in 40 countries.

All 32 of her novels – which included fan-favourites such as The World Is Full Of Married Men, Lucky and Hollywood Wives – also appeared on the New York Times bestseller list.

According to People Magazine, Collins was diagnosed with Stage 4 breast cancer back in 2009, but chose to keep her illness out of the public eye. In an interview on 14th September, Collins stated that she had “no regrets.”

Collins is survived by her three daughters and her sister, Joan.