Following in suit of his former co-stars, original Ghostbuster Ernie Hudson has joined the cast of Paul Feig’s upcoming reboot. 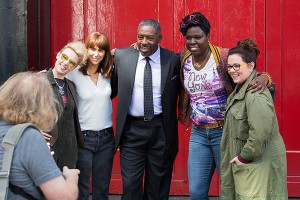 Above: Hudson poses with the new all-female cast on set.

Hudson – who played Winston Zeddemore in the original films – was seen on the set of the new movie, as the cast entered their final day of shooting. Sony have declined to comment on who Hudson is playing in the reboot, but it is unlikely to be his original character.

With the addition of Hudson, it would now seem that almost all of the original actors will be appearing in the new film, with the exception of Harold Ramis, who sadly passed away last year. Speaking to The Hollywood Reporter about the new line-up, Hudson said: “Four fiercely funny, foxy, females busting ghosts … phenomenal!”

Also starring Chris Hemsworth and Neil Casey, Ghostbusters is set to be released on 22nd July 2016. Watch the trailer for the original 1984 classic, below.