Presented by comedienne, Jo Brand, An Extra Slice give amateurs bakers from the audience the chance to show off their bakes – whether they’re good or bad! 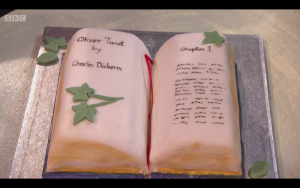 This week was Victorian week on GBBO, with all the cakes being traditional and from the Victorian era. Shaheer Khan – a second year Geography student at the University of Southampton and publicity officer for CakeDec society – brought along his bake of Charles Dickens’ novel Oliver Twist.

Speaking briefly to Brand, Khan stated why he chose this bake: “As we are students, we love books!” Brand response was hilariously timed stating that it looked as though Khan had started the novel half way through the book. She later called it “great.”

An Extra Slice also sees the baker who left the competition come on the show to talk about their experience. This weeks evictee was fan-favourite, fireman Matt, who bought along his spiced soda bread at a shot of redemption.

You can re-watch Shaheer and the Cake Decorating society on BBC iPlayer.

The Great British Bake Off: An Extra Slice airs every Friday on BBC2 at 9pm.