Music from a recently-discovered songbook believed to have belonged to Henry VIII’s second wife Anne Boleyn has been performed for the first time in almost 500 years at Shakespeare’s Globe Theatre, London.

The songbook, written in mostly Latin and French, disappeared five centuries ago and has only recently been discovered at the Royal College of Music. Dr David Skinner, Director of the Alamire Choir, told ITV News: “It gives us a glimpse as to who Anne Boleyn was before Henry VIII, before the tyrant.”

The book is signed by Anne, who also wrote her father’s motto ‘Nowe Thus’. Wessex Scene contacted Southampton University History Professor George Bernard, who has specialist knowledge on Anne Boleyn, for his insight. He said: “A fascinating piece of detective work by David Skinner suggesting that a manuscript music book now in the Royal College of Music including works by leading late fifteenth and early sixteenth century composers such as Josquin was owned by Anne Boleyn, who became Henry VIII’s second queen.”

“The claim rests on the inscription “Mistres ABolleyne nowe thus” – “nowe thus” was her father’s motto, Skinner claims. If Anne did indeed own this manuscript, then she was clearly fascinated by the latest musical works of her day. I look forward to the concert at the Cadogan Hall, London, on 17 March 2016 when David Skinner will be conducting the Alamire choir in a live performance of what he presents as Anne Boleyn’s songbook.” 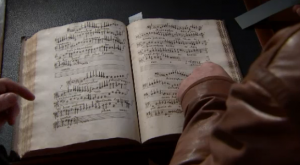 Dr Suzannah Lipscomb, a Tudor historian, also discussed the find: “The most interesting thing about Anne is what this music represents. She was a woman of great talents, of huge depth of intellect, real interests, who was pursuing all that was fashionable.”

One composition in the book, translating as “Darling I’ll Give You Pleasure”, refers to Anne making Henry wait for an intimate relationship. This is thought to have initiated the Reformation, making it historically significant. Some have theorised that on nights where Henry wanted to have intimate relations with Anne, she would play that song to make him more patient.

Outgoing Humanities Faculty Officer and History Masters student William Cable also commented, summing up the find with this poignant note: “Moments like this remind us that these people aren’t just characters in a book, but were real people with real lives, and with people like Anne Boleyn and Henry VIII those real lives still have an impact on us even today.”