Queen of surprises Beyoncé has done it again – she’ll have a brand new track out in less than a day. 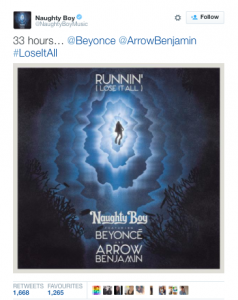 The singer will feature on Naughty Boy’s new single ‘Runnin’ (Lose It All)’ alongside Arrow Benjamin, which will be released worldwide on Friday 18th September.

Naughty Boy confirmed the news on Twitter with the official artwork, before revealing a brief snippet of the track ahead of its full premiere. The song is the first track to be lifted from Naughty Boy’s forthcoming second studio album.

‘Runnin’ (Lose It All)’ actually leaked online last month, but at that point only featured vocals by Arrow Benjamin.

This is the first new material we’ve heard from Beyoncé, since she released her self-titled album back in 2013. The star shocked the world by uploading the record on iTunes unannounced.

Naughty Boy’s new album will serve as the follow-up to his 2013 debut Hotel Cabana, which featured collaborations with the likes of Emeli Sandé, Bastille, Sam Smith and Ed Sheeran.

Listen to the snippet of ‘Runnin’ (Lose It All)’ below.