Read more
You are at:Home»News»Global News»First trailer for Disney’s live-action remake of The Jungle Book is released – watch
By Georgia Simpson on September 15, 2015 Global News, News

The new trailer for Disney’s live action version of The Jungle Book has been released.

The shorter teaser trailer, which is narrated by Scarlett Johansson’s mistrustful snake Kaa, sees Mowgli (played by newcomer Neel Sethi) discover his jungle surroundings. On his journey, he meets several animals, including predators such as the tiger, Shere Khan (Idris Elba) and friends like Baloo the bear (Bill Murray) and Bagheera the panther (Sir Ben Kingsley). 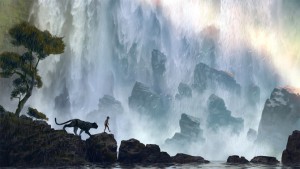 Directed by Iron Man’s Jon Favreau, the trailer reveals a beautiful CGI jungle. Mowgli is infact, the only live-action part of the film which was otherwise captured with the use of green screen and motion capture.

What has not been revealed in the trailer however, is how musical the film would be compared to the original 1967 animation, which featured classic songs such as ‘I Wanna Be Like You’ and ‘Colonel Hathi’s March’. However ‘The Bare Necessities’ is teased at the end of the trailer, when Baloo and Mowgli whistled a short snippet of the tune.

Warner Bros. also has its own version of The Jungle Book in the works, which will star Cate Blanchett, Benedict Cumberbatch and Christian Bale. Directed by Andy Serkis, that version is slated for release in 2017.

This film meanwhile, is set to be released on 15th April 2016, with the cast also featuring the likes of Lupita Nyong’o as wolf Raksha and Christopher Walken as Louie, King of the Monkeys. Watch the trailer below.