Sam Smith has all but confirmed that he is the mystery artist set to record the new Bond theme, after posting an alluding image on his Twitter account. 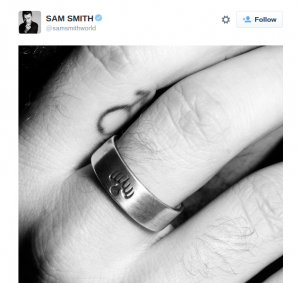 Smith tweeted this image of himself, wearing a Spectre ring. (Image via Instagram)

The identity of the artist given the prestigious opportunity has been speculated for months, with the likes of Ellie Goulding and Paloma Faith all rumoured to be involved. But now, it seems that Smith is the singer most likely to follow in the steps of Adele, Tina Turner and Shirley Bassey.

Controversially, the singer has been denying his part in the project for months, going as far as to say “That’s not me. That’s definitely not me” during an interview with BBC Radio 2 in the summer. He even tried to pin it on Goulding, claiming: “I heard Ellie Goulding was going to do it, I heard loads of different things.”

However, after posting a cryptic picture of himself, wearing a ring with the Spectre terrorist organisation logo on it – the very same ring that is featured in the trailer – speculation has reached boiling point, with rumours of a big announcement coming tomorrow (Tuesday 8th September).

Speaking about the new Bond theme back in July, director Sam Mendes suggested that the song had already been recorded, stating: “It’s fantastic and I’m very excited about it.” Pre-sales for Spectre tickets went on sale today (7th September) with the film set to hit the big screen in the UK on 26th October.

Watch the trailer for Spectre, starring Daniel Craig as James Bond, below.