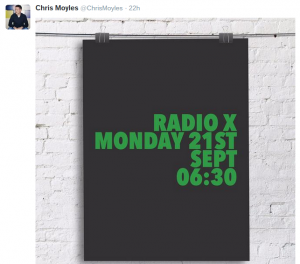 Moyles tweeted the date of his return in this picture.

Rumours about the new station’s lineup have been circling all summer, but this morning (Monday 7th September), the former “Saviour of Radio 1” confirmed that he is to be Radio X’s new breakfast show host. The first show is set to air on Monday 21st September and will run every weekday from 6:30 to 10am.

Interestingly, this will mean that Moyles will be in direct competition with his BBC Radio 1 successor, Nick Grimshaw, as well as Chris Evans’ similarly popular Radio 2 breakfast show.

This is the first time Moyles has returned to a regular slot on the airwaves, since he hung up his mic at Radio 1, back in September 2012. He will be joined on the new show, by his former BBC colleagues, Dominic Byrne and Pippa Taylor.

Radio X – formerly known as XFM – has been refurbished to become the “first truly male-focused” radio station in the UK, with other confirmed DJ’s including Vernon Kay, Johnny Vaughan and Kaiser Chiefs’ frontman, Ricky Wilson.