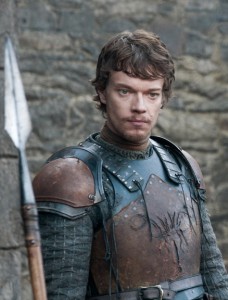 The resemblance between Uncle and Nephew seems uncanny…

Variety have confirmed that Asbæk – who is best known for his roles in The Borgias and Luc Besson’s Lucy – will join HBO’s fantasy series, as a member of House Greyjoy. Euron is the uncle of Theon and Yara, and the younger brother of Balon Greyjoy, Lord of the Iron Islands.

In George R.R. Martin’s A Song of Ice and Fire novels, Euron is portrayed as a skilled warrior and the ruthless captain of a ship called the Silence. Known for his contemptuous and unpredictable moods, Euron is also a menacing leader, having ripped out the tongues of his entire crew. If the TV show follows in the same footsteps as A Song of Ice and Fire, Euron is likely to play a pivotal role in the series as it goes forward.

Asbæk’s casting has also dispelled rumours that Ian McShane might play the character. McShane was cast in a mystery role last month, but given this latest addition to the show’s ensemble, it now seems more and more likely that McShane will be playing the role of Samwell Tarly’s father, Randyll.

Filming for season six began last month and has been under the scrutiny of many hopeful fans, after several of the actors known for playing (seemingly) deceased characters were spotted on set.

Game of Thrones will return in Spring 2016. Watch a Greyjoy scene from season 2 below.