Read more
You are at:Home»News»Global News»Eddie Redmayne stars in the first trailer for The Danish Girl – watch
By Natalie Fordham on September 1, 2015 Global News, News

Eddie Redmayne looks as though he is Oscar-bound once again thanks to his latest movie, The Danish Girl. 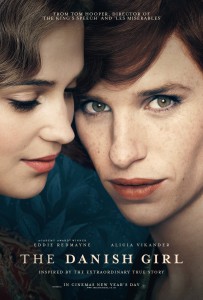 Above: The poster for The Danish Girl

The Theory of Everything star plays transgender pioneer, Lili Elbe in the forthcoming biopic from Les Misérables director, Tom Hooper. The first trailer for the drama shows how Lili, an artist previously known as Einar Wegener, became one of the world’s first known recipients of gender confirmation surgery in 1930.

Redmayne recently spoke out about Caitlyn Jenner’s transition, calling it an “amazing” moment for the transgender rights movement. “I absolutely salute [Caitlyn’s] courage,” Redmayne said. “Hers is a very specific story, and it’s one that shouldn’t stand for everybody’s. But it is amazing what she’s gone through and how she’s done it.”

The Danish Girl will be released in the US on 27th November, and will follow in the UK on 1st January, 2016 – the very same date that Redmayne’s The Theory of Everything premiered in the UK, suggesting that this film might have just as huge a part to play this awards season.