Channelling his inner Motown-star, indie supremo Miles Kane has the crowd in the palm of his hand as he performs a mix of old and new bangers.

For one of indie’s finest front-men, it must have been a tricky few years without live performances. Marking his first shows (other than festivals) since 2019, Miles Kane was set to take back to Britain’s stages in January in support of his new album ‘Change the Show’, only for that to be delayed due to a rise in COVID cases. But finally, following a string of European dates, Kane returned to Southampton for the first time since 2011(!), when he performed at The Joiners on Thursday.

Kane’s show opened with a 30-minute set from Scottish musician Brooke Combe, whose unique mix of R&B and indie sounds quickly drew a large audience away from the bar and close to the stage. She performed much of her discography, with Miss Me Now the most distinctive. While many of the songs show off her Amy Winehouse-esque silky yet powerful vocals, namely A-Game and Impress You, Miss Me Now‘s sultry groove displayed a stage presence that surely sets Combe up for great things. Brooke also delivered a crowd-pleasing cover of Arctic Monkeys’ 2013 hit Why’d You Only Call Me When You’re High?, certainly a clever choice to get the quite “lad”-heavy crowd on her side. I think her music perfectly complements Kane’s current live tour, with the jazz influence between both allowing for a sense of coherence between the two. 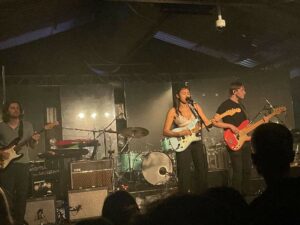 Kane delivered a mix of old and new material, with a third of the setlist dedicated to Kane’s new album Change the Show. I think the tour delay benefitted the show in this way, as the crowd were able to memorise lyrics for the new songs, leading to one of the most euphoric gig crowds I’ve experienced in quite a while! Usually for gigs it’s the old classics or recent big hits that get a good reception. But I cannot stress enough how fantastic it was to go to a show where at least all the choruses were bellowed back at Kane.

That is not to say, however, that the show was wall-to-wall bangers. I don’t think that is ever a good thing. Kane’s setlist is perfectly composed to allow for a few slower songs that still have enough of a beat to groove to, such as See Ya When I See Ya and a pleasantly surprising cover of The Beatles with Don’t Let Me Down.

When I spoke to Kane last month, he made clear just how much he was looking forward to this tour and it’s clear in every minute of the show that Kane just loves being on stage. Oozing charisma, it’s simply hard to take your eyes off him when he’s in his element on stage. Inspired by his love of 50s Motown and Northern Soul, Kane sort of replicates a performance style that would be associated with that sort of music (it gave me strokes of 70s Sunday Night at the Palladium variety performers) but never steps into pastiche and always has a trademark ‘indie’ flair.

Of course, being a rare solo artist in the indie scene, Kane needs a reliable live band to keep up with his energy, and he certainly has that. Joao de Macedo Mello, on keys for much of the show, came to the front of the stage to deliver a euphoric saxophone solo to Never Get Tired of Dancing which lifted the electric energy in that reasonably sized room tenfold. Guitarist Josh McClorey also shone, providing the recognisable guitar riffs for the likes of Come Closer and Inhaler. Perhaps unsurprisingly, Kane also got his guitar out at certain points to showboat during guitar solos which to some might be a bit obnoxious, but it plays into his live character completely.

What makes Kane’s live shows just so special is that in far too many cases, indie artists that have been in the spotlight for a decade or so just refuse to reinvent themselves in any way whatsoever. With Miles Kane, there’s something different to look forward to every time. With his last album Coup de Grace, and its subsequent tour, Kane delved into his love of glam rock growing up and I think that his jazz-tinged direction now is quite bold when his Last Shadow Puppets band-mate and friend Alex Turner got a lot of hate for being inspired by that sound on Arctic Monkeys’ last studio album.

I would happily see Miles Kane again on his next tour and would recommend anyone else to see him now as he heads across the country. Packed with a mix of absolute bangers, groovy jazz-influenced tunes and enough confidence to give Liam Gallagher a run for his money, Kane is easily one of the most interesting indie artists right now – and I’m not sure he gets enough recognition for it.