With a generous amount of recently released songs, the crowd weren't always on the band's side, but Feeder still managed to deliver an enjoyable night of rock.

Feeder, for me, are easily one of Britain’s most underrated rock bands. Despite a career of over 20 years now, headlining Download Festival in 2005, and releasing 11 studio albums, they rarely seem to be mentioned as one of the big bands that Britain has produced in the last two decades. Nevertheless they have a strong fanbase, and tonight’s show at the O2 Guildhall Southampton, in support of their new Top 10 album Torpedo, showed just why they’re still performing to 1,500+ capacity venues.

Bristolian pop-punk duo Superlove opened the show, with one of the most engaging support slots I’ve witnessed in quite some time. Along with an intriguing mix of lighter indie sounds and metal that Corey Taylor would be proud of, frontman Jacob Rice kept the crowd entertained with light banter between the songs. When a technical hitch stopped them play their closing song, they instead improvised with a short crowd-pleasing rendition of Oasis’ Champagne Supernova. With an exciting UK pop-punk scene evolving in recent years with the likes of YUNGBLUD and Hot Milk, Superlove are certainly ones to watch!

I think one reason why Feeder seem to fall into the cracks of British rock is that it’s hard to place them within a single genre. Over the last two decades, they’ve spanned pop-punk, alternative rock and more indie-flavoured sounds- like the Royal Blood-esque, fuzzy, heavy guitars of their latest release Torpedo. Tonight’s setlist spanned their entire career, with a surprising (but welcomed) amount of songs being performed from their latest album – unusual for a band with such a rich discography!

Though I think the sheer amount of newly released songs led to quite a low-level of fan engagement, I don’t blame them at all for opting to play something new rather than regurgitate all the old hits every single time. The sound mixing was superb for the heavier new tracks, with title-track ‘Torpedo’ sounding particularly euphoric as the bass could be felt storming across the venue’s carpeted flooring. I must also mention that the crowd engagement probably wasn’t as strong as it could have been due to a weak stage presence from lead vocalist/guitarist Grant Nicholas and touring guitarist Tom Gleeson. It was only bassist Taka Hirose who was an absolute joy to watch, jumping violently around the stage as though no energy had been lost in the last 20 years. 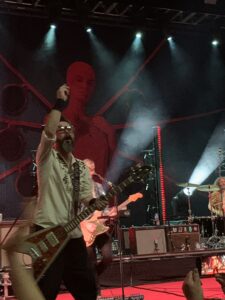 That is not to say that a good live show requires off-the-wall, constant crowd interaction- far from it. But even Nicholas did mention how quiet the show had been on this instance, perhaps it being a Tuesday didn’t help! Technically, the band are fantastic to watch, a masterclass in technical rock. ‘Magpie’ and ‘Wall of Silence’ were particular highlights in that regard.

And of course, those big sing-along classics that were scattered throughout, such as ‘Just the Way I’m Feeling’, ‘High’, and of course, ‘Buck Rodgers’ – which, despite being 21 years old at this point (as Nicholas mentioned on stage), doesn’t feel close to sounding dated!

Overall, it is clear that the band are technical masters, and crowd interactions did shine in song such as ‘Fear of Flying’ and the closing hits, it just felt as though Nicholas felt a bit distant at times from the crowd. I can almost guarantee that the crowd would have been a bit more on his side and up for a mosh, like he stated that he wanted, if he attempted to just interact a little more.