Despite their chill namesake, Spacey Jane worked a rowdy crowd with ease.

Filing into the Loft for Spacey Jane’s sold-out show, the atmosphere was electric. The venue was packed even before any act had taken the stage, the bar busy with fans. Support came in the form of Morgan Harper-Jones, who played the audience with only a guitar and provided some meandering singer-songwriter tunes. On paper, it was a strange fit for such a riled-up audience, but thanks to some relatable crowd banter in between songs her material went down a treat. An airy cover of ‘I Wanna Dance With Somebody (Who Loves Me)’ concluded her set and sent the crowd, in true British fashion, into major singalong mode.

The UK’s passion for Australian bands was on full display as Spacey Jane next took the stage, shouts of “up the Spacey” catching like wildfire. The band wasted no time and launched right into things — frontman Caleb Harper led with his hips while guitarist Ashton Hardman-Le Cornu brought extreme energy by stomping around and throwing his guitar as much as its strap would allow. It only took 2 songs for the crowd to open up a mosh pit, which was respectfully shut down by Harper multiple times for safety reasons. More impressive was the floor of the venue, literally shaking from start to finish as the audience jumped and danced along. The band seemed so surprised by this reception that Harper remarked at one point that crowds outside of Australia barely know their lyrics; at the Loft, it was instead quite the opposite. You would be mistaken for thinking the venue was housing an exclusive audience of super-fans. 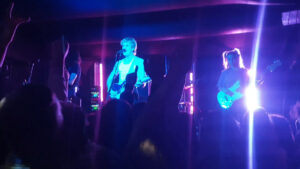 Other band members also brought heat. Drummer Kieran Lama could be seen swigging from a bottle of cheap wine inbetween cues and efficiently holding down the rhythm section. Bassist Peppa Lane was a crowd favourite, receiving persistent cheering as she took the mic and introduced the other band members. The group was extremely tight as a whole, and it was great to watch a band totally in-tune with each other. A muddy live mix unfortunately let some of their tunes down, particularly apparent at the beginning of their set. Things sounded like they were adjusted as it went on to give the guitars more volume and Harper’s vocals more presence — by song 4 or 5, I had all but forgotten about this issue. The simple lighting of the show also brought some character, lighting the band with a cool blue wash. They were backgrounded by caged light bars that alternated colours on certain cues. It allowed Spacey Jane to remain the focus of the stage while adding a simple visual flair to their set — I enjoyed this aspect of the staging a lot. 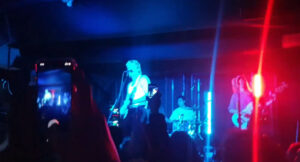 After a set of energetic crowdpleasers, the band topped things off with a slower singalong in ‘Booster Seat’. A raucous two-song encore left us on a high as we filed out — the band seemed chuffed and Harper brought the energy for their final song. “You guys are pretty rowdy for a Tuesday night,” Lama had earlier said, which perfectly encapsulates the mood of the show. Despite some mixing issues and a crowd a little too mosh-eager for their own good, Spacey Jane at the Loft was a pretty floor-trembling night out.

Spacey Jane are on tour in the UK until April 22nd, and you can get your tickets here!