Jake Bugg's latest tour proves the importance of origins, as his debut tracks gave fans the chance to sing their hearts out.

Nottingham-born Jake Bugg, who shot to fame after the release of his debut album Jake Bugg, took the stage of Southampton’s O2 Guildhall on Monday for an excited crowd. Bugg, who signed with Mercury Records at the age of only 16 after performing on the BBC Introducing stage at Glastonbury in 2011, has now got an incredible discography, with currently five records to his name. Having never seen Bugg perform live before, but having loved his tracks since I first heard them, I was over the moon to be able to catch him on his latest tour.

The tour, titled ‘Saturday Night, Sunday Morning’ to showcase the latest tracks from his album of the same name released in 2021, started with a bang as Liverpool-based Luke Royalty and Edinburgh indie band Vistas prepared the crowd for the main event. As a big Vistas fan, it was amazing to be able to finally see them live, as their melodic pop-infused tunes allowed fans to ease into the venue and get ready for Jake Bugg’s arrival.

Starting the gig with three tracks I personally hadn’t heard before was an interesting experience. As a Jake Bugg fan but a low-level one, it was amazing to experience a wealth of new music to listen to after the show was over. Opening tracks such as ‘Lost’ and ‘Kiss Like the Sun’ from Saturday Night, Sunday Morning constructed an exciting atmosphere that proved Bugg’s eagerness to play tracks from his latest release, having been unable to perform last year due to the pandemic. With eight tracks from the fifth studio album, I was educated in the changes Bugg’s music has gone through, as his latest single ‘All I Need’ is much more electronic than his traditional style. Whilst the track diverts from his expected style, the crowd welcomed it with open arms, singing back the lyrics (even I knew this one!). 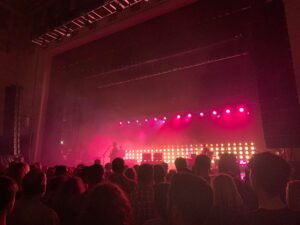 Taking it back to his older tracks was an important part of the show for Bugg, emphasising the happiness hearing crowds belting his tunes back means to him. ‘Seen It All’, ‘Two Fingers’ and ‘Lightning Bolt’, all from Jake Bugg, brought the crowd’s energy to a maximum. As someone who often finds themselves at heavier gigs with mosh pits and crowd surfing, it was nice to witness a good adoring crowd who are begging for a sing-a-long. Bugg’s slower tracks were more common than I expected, but his setlist had a perfect ratio of slow to fast tracks, as songs like the melodic ‘Broken’ and ‘Simple As This’ slowed the pace to create a more emotion-fuelled atmosphere.

We were reminded by Bugg himself that his debut album was released exactly 10 years ago, making the tour a special anniversary for the band and fans alike. The old tunes stand strong, and it is clear that whilst Bugg’s tunes are all executed perfectly, the crowd want to hear his most known tracks in comparison to the lesser-known tunes – although these are still appreciated. Jake Bugg’s music is clearly influenced by the likes of Oasis and Bob Dylan, making for an easy-going, heartfelt concert experience.