Since forming in 2019, Leeds-based post-punk outfit Yard Act have quickly risen the genre’s ranks, despite (of course) having the COVID-19 pandemic to contest with in the following year. Their debut album, ‘The Overload’ was released in January this year, reaching #2 in the UK albums chart (just marginally behind Years & Years at the top spot), cementing themselves as the next ‘big thing’ in the scene. In fact, following tonight’s (February 19th) performance at The Joiner’s in Southampton, the band already have another performance in the city booked for this October, in the significantly larger venue The 1865.

Tonight’s show was preceded with a support slot from New York duo Baba Ali. I’d not checked out their tunes prior to tonight’s performance and was frankly blown away! Their intriguing combination of New Order-style synths with a heavy guitar backing that wouldn’t be amiss in an IDLES single is certainly innovative. They drew a good crowd too at tonight’s sold-out show, I’d expect exciting things from them in the future!

Following a short break, Yard Act arrive on the stage to the ‘Rocky’ theme tune and go straight into their debut single ‘Fixer Upper’. Frontman James Smith, previously a member of Post War Glamour Girls, has the audience in the palm of his hand from the off. Frankly it’s hard to stop paying attention to him! His performance feels like a bit like a cross between The Fall’s Mark E. Smith (certainly a comparison he must have heard before) and Jim Carrey. 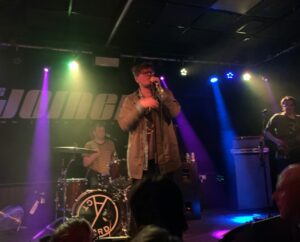 I’d say that it felt like a pretty much perfect live show, they perform nearly every song from their discography thus far, with some decent audience banter in between. Though one quite bizarre moment occurred when Smith proceeded to greet a punter by touching the tips of their fingers together, inspired by ‘E.T. the Extra-Terrestrial’, of course.

Yard Act’s contemporaries in their genre, such as Fontaines D.C. or Squid can certainly also deliver a blistering live performance. However, I certainly feel as though the Leeds four-piece stand out greatly with their pop sensibilities. Many of the songs performed tonight had big sing-along choruses that I think certainly would not be out of place at a big arena show. (Fontaines D.C. aren’t far off that level now, I can certainly see Yard Act there in a few years time!) ‘Payday’, a single from ‘The Overload’ delivers my favourite chant worthy moment I think, the chorus of “Take the money, take the money, take the money and ruuuuuuuuuun” feels significantly elevated from the studio version, where dare I say it does feel a little over-produced. Tonight at The Joiners, you can feel the raw, live energy running throughout the band member’s bones.

Speaking of, while James Smith is, without doubt, the star of the show, attention must be paid towards the band consisting of: Sam Shipstone (guitar), Jay Russell (drums) and Ryan Needham (bass). There does seem to be a slight recurring structure in their music where, after a couple of solid choruses, they drift into a madcap breakdown in the closing minute of the song.  This is particularly prevalent in the song, ‘The Overload’, where Shipstone’s heavy riffs are combined with a spectacle of the venue’s lighting system, certainly leading to a (positive) ‘overload’ of all your senses.

I’d certainly make sure to catch Yard Act on their present UK tour, but if not, (as mentioned) they’re back out for another run of UK dates in the Autumn.

Yard Act are currently on tour across the UK, check out the tickets here!