Enter Shikari's performance was a showstopping voyage into their latest album, using elements other than their music to create a night to remember.

Hereford-originating British band Enter Shikari, consisting of frontman Rou Reynolds, bassist Chris Batten, drummer Rob Rolfe and guitarist Rory Clewlow, have always been known to blur the line of rock music with an EDM twist – and their latest tour is evidence that this experimental form of art is one that gets the crowds going.

Finally getting the chance to tour their 2020 released album Nothing Is True & Everything Is Possible, the Shikari boys put on a show to remember, with their O2 Guildhall date being one of the best live shows I’ve attended in a long time (and I’m not just saying that). Although Enter Shikari formed as a metal-core band way back in 1999, they have evolved into a musical group that explores exciting new musical styles, pushes boundaries with its lyrical themes and takes on multiple influences from other current rockers. 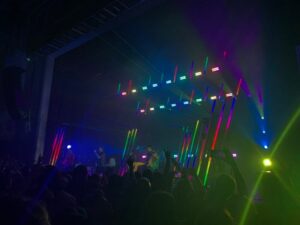 The concert offered a truly exciting live experience, taking the world created within Nothing Is True & Everything Is Possible and curating a show that immerses you within this world. After starting the gig with two brilliant supports, Nova Twins and Dinosaur Pile-Up, Enter Shikari used the in-house speaker system to their advantage – playing a spaceship countdown that prepared the audience for the start of their performance. “Preparing for takeoff” played over the speakers as the crowd’s anticipation grew, and once the countdown had ended, the band took to the stage with their incredible track ‘THE GREAT UNKNOWN’ blasting through the speakers to a flurry of confetti shooting out of cannons. The Guildhall was lit up with exciting faces and four members on stage who clearly had been excited to release all their pent up emotions since their last tour two years ago.

Tracks such as ‘Juggernauts’ and ‘Sssnakepit’ from their earlier, heavier musical days worked brilliantly in juxtaposition with sentimental tracks such as ‘Mothership’ and ‘satellites**’. ‘satellites**’ grabbed the attention of the crowd in the most picture-perfect moment I think I’ve ever seen at a live show, uniting the audience through their love of music and reminding them of the importance of hope. Enter Shikari are a pretty political band, with Reynolds often making statements regarding the issues of Capitalism and discussions of climate change – they recently played two special shows in Glasgow during the COP26 conference to show their solidarity with protestors. 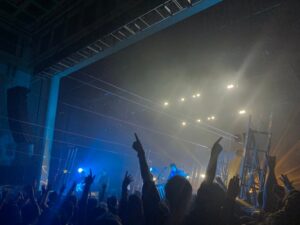 Bringing out ‘The Spark Machine’, an EDM music kit that the band introduced through the release of their 2017 album The Spark, is always an amazing part of every Shikari gig, with tracks like ‘Rabble Rouser’ being used to draw on the band’s electronic influences. Even their infamous track ‘Anaesthetist’ was played in full with an EDM remix following it which audiences went wild for. ‘Sorry, You’re Not a Winner’ is a personal favourite track of mine, and although I’ve seen Shikari play a few times before, at festivals and smaller shows, nothing beats hearing everyone shout along to the metal-core karaoke favourite of many ex-emos like myself. Whilst encores are an expected part of every show, and there’s usually no element of surprise held when an encore happens, Enter Shikari managed to captivate the audience by having Reynolds walk slowly onto the stage to an acoustic version of the beautiful ‘Constellations’ – a “real lighters in the air” kind of tune.

With a setlist of 19 songs, Enter Shikari truly pulled out all the stops for their Nothing Is True & Everything Is Possible tour, as the band proved yet again of the power held within not only their lyrics but the creative minds they share between them, and the connections they hold with their fans. It’s not often you catch 60-year-olds dancing to EDM music, but Enter Shikari somehow manage to make that happen.