Frank Carter and the Rattlesnakes showcased their latest album Sticky with top-level energy and a jam-packed setlist featuring some old gems to get the crowd pumped.

If there’s a band you need to see live, it’s the one and only Frank Carter and the Rattlesnakes. Known for their energy-fueled live shows and punk-rock angst, frontmen Frank Carter and Dean Richardson – supported by their lovely band – understand just what makes an exciting night out. From a setlist consisting of mostly tracks from their album Sticky which was released just last month, the band’s Guidhall date was a stand out performance (and that’s coming from someone who’s seen them a worrying amount of times.) 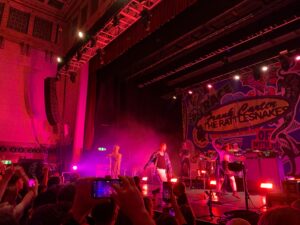 Starting with a back-to-back trio of songs before welcoming the crowd to the venue, Frank Carter and the Rattlesnakes continued the life brought to us by the two exceptional supports, Lynks and Casyette, with a new track ‘My Town’, followed by two of the Rattlesnakes most loved tunes – ‘Wild Flowers’ and ‘Tyrant Lizard King’. My last gig pre-COVID (which I’m certain was the same for many others in the audience) was the band’s sell-out 2020 show at London’s Ally Pally, so seeing some of my favourite tracks really highlighted both the band and the crowds’ love and loss of gigs over the past two years. 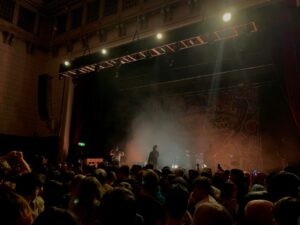 Bringing Lynks and Casyette to the stage was a stellar move by the band, as both musicians lit up the room and brought their features on Sticky to life with tracks ‘Off With His Head’, ‘Bang Bang’ and a personal favourite ‘Go Get A Tattoo’ played for the first time to eager fans. It was lovely to see the clear support of small, lesser-known artists, something that lead singer Frank Carter has always been vocal about. Alongside their support for indie bands, Carter followed his activism through to a track dedicated to the safe space for girls and non-binary people to get in the pit free from worries – this is a moment included at every Rattlesnakes gig, with the same strength every time.

As Frank Carter and the Rattlesnakes are keen on playing small venues, I was surprised when the O2 Guildhall was chosen, and before entering the gig worried it would be just that little bit too much space to fill. Seemingly I was wrong, as Frank, Dean and the rest of the band held the crowd from start to finish with a gripping performance that showcased the best (and most) of their latest album Sticky. If you’re looking for a band to bring the adrenaline, Frank Carter and the Rattlesnakes are the ones to check out!

Frank Carter and the Rattlesnakes are still on tour. You can find out more information and book tickets by clicking here.