My first impression of Engine Rooms on this first visit was of both horror and awe at the volume of the sound system, which reminded me how out of practice I was for going to gigs! The room was relatively empty when we first arrived, but gradually filled up during the support acts’ performances. Arcade Hearts were the first act, beginning the evening with some standard, reliable indie pop. The second support was Joey Maxwell, who seemed to be a much better fit for JAWS’ genre, demonstrated by the crowd’s rowdy energy. Whilst I had never listened to him before, I was pleasantly surprised by the catchy ‘Easy Life meets Machine Gun Kelly’ performance.

With the crowd warmed up (and my eardrums having adjusted to the noise), JAWS took to the stage with one of their most popular songs ‘Gold’, stirring up the excitement in the room. Even the new unheard songs were received with a very enthusiastic response from the dancing fans. The band gave a humbling speech about how strange it was playing ‘Anyway, Now’s Not The Time’ live for only the second time despite its 2019 release, which felt very surreal. The setlist included all of the classics; my personal favourite was ‘Stay In’, with everyone singing along to the catchy hook. Whilst the audience were very lively, the football lads’ chants became very old, very quickly. The light-hearted heckling between each of the songs didn’t seem to phase the band, but was annoying nevertheless. 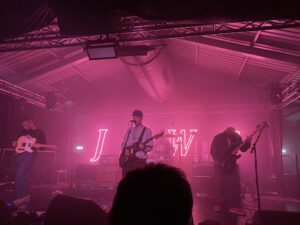 While the band definitely worked the crowd, the lead singer Connor Schofield seemed quite awkward up on the stage, understandable after such a long break in performing. But this did mean the show was slightly uncomfortable to watch at times, the nervous energy occasionally failing the group. The audience hardly minded; recurring chants were started for each of the band members after Schofield joking about the lack of appreciation for guitarist Alex and drummer Eddy. The star of the show was bassist Leon Smith, who played enthusiastically and threw himself around during the loudest parts of the set. This was helped by the lighting design, which included occasionally bright colours (including a red and blue 3D effect during one song!) and kaleidoscopic moments to bring the band’s songs to life a little more. The illuminated “JAWS” letters in the back were also a nice touch, lighting up in alternating sequences to keep the visuals fresh.

Despite the few irritating concert-goers, the performance was still very enjoyable to watch, with mesmerising visuals and a tight, well-rehearsed set of the band’s style of indie rock. JAWS went over a treat with their audience, and are one to see if you enjoy their discography!

JAWS are on tour around the UK until December 13th, and you can buy tickets or even request a show here!

Psychology student who spends all of their maintenance loan on gig tickets:)