Bloxx, with almost 200k monthly listeners on Spotify, are an Indie pop band formed in Uxbridge, West London, in 2016 by Booth and guitarist Taz Sidhu. The West London four-piece have soared to prominence at a rate nearly unheard of in today’s alternative landscape, from supporting famous indie bands such as The Wombats and Two Door Cinema Club at Reading and Leeds festival. During their tour, they performed at Heartbreakers in Southampton with similar genre supporting acts, Emma Mcgrath and The Rills. 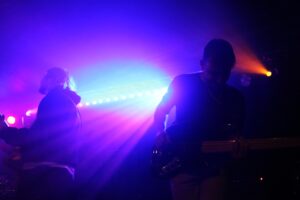 The highlight for me was when Taz went full ‘rock star mode’ and played his guitar behind his back as he came towards the stage near the audience during their last song, only a touch away from his fans; the screams lit up the venue. With a switch-up in the atmosphere, they played ‘Emily’, which is a song written by the lead singer Fee about addiction; still a captivating performance in an emotional but positive way. The astonishing performance from the guitarist showed great enthusiasm and passion throughout the gig, especially in ‘Everything I’ve ever learnt’. I couldn’t stop smiling, and the bond between the band members was incredibly infectious. 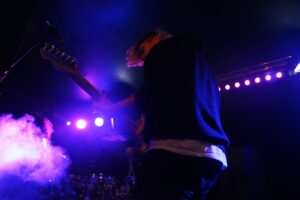 The excitement from the crowd, along with the dim smoke diffusing onto the stage, we could all feel the energy and our hearts were racing before they were even on. The ambiance was like being at a huge rock concert with millions of people; the power of just four people creating a drastic amount of energy and excitement was incredible. Playing songs like ‘Sea blue’, with almost 4 million streams on Spotify (over 100k on YouTube), and ‘Off my mind’ from their debut album Lie Out Loud, the audience could connect to their music with a smile on their faces the entire time.

Fee described the exacerbating and thrilling tour life by letting out the fact that she has worn the same T-shirt for two days in a row… seems like she needs to start wearing her own merch! With laughter, and pure rock vibes, it was a gig I will never forget; more importantly I’ve re-discovered a new genre of Indie-pop I didn’t know still existed. After forming in April 2016 and spending a year performing in their hometown, the band embarked on their first tour in 2017 and rapidly gained a loyal fan base; their impact on the music industry is only gaining more and more popularity as the years go on. There isn’t a single song they’ve created that someone could hate. I’ve never felt more alive.