Serge is the 'underdog' no more, he leads a masterful return for the Leicester band.

Kasabian have had, frankly, a turbulent previous year. Disgraced frontman Tom Meighan was promptly booted out of the four-piece after pleading guilty to assault on his fiancée; this could well have tarnished the band’s legacy. However, the prompt handling from lead guitarist-turned-frontman Sergio “Serge” Pizzorno has allowed the Leicester-formed group to continue without such a shadow lingering over them. This is clearly a new era. This Southampton date has been one of the last in a tour of smaller venues than Kasabian would usually command, ahead of larger shows and festival headline slots next year.

London four-piece The Skinner Brothers are the support band of choice for the tour, sandwiched between DJ sets of indie classics from Katie Owen, who serves to be a class connoisseur for getting the crowd on their feet before the main event. The Skinner Brothers, however, were about as generic as you can get for a “football lads” indie band, crucially lacking any big chant-along choruses for the crowd. However, it is clear that they are remarkably skilled instrumentalists; a bright future could certainly be upon the Zac Skinner-fronted band should any lyrics stronger than “It’s pints for the lads in the morning time” (‘Away Days’) emerge. 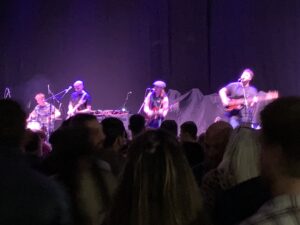 The vibe amongst the fairly rowdy audience was immense building up to Kasabian’s arrival on stage – a single shout I heard of “where is Tom?” was promptly drowned out by bellows of “Sergio!”. The band opened up with an impeccable run of singles with ‘Club Foot’, ‘Ill Ray (The King)’, ‘Underdog’ and ‘You’re in Love With a Psycho’, by which point Serge had seamlessly stepped up to his new role out front and held the crowd within the palm of his hand. Had somebody not known, it would not be easy to tell that this was Pizzorno’s first tour as frontman.

Former frontman of the much-missed The Music, Rob Harvey, also serves as a new addition for Kasabian this tour on backing vocals and guitar. Without a doubt, he perfectly balances with Serge’s distinct tones to bring the overall sound of the vocals to another level. Particularly during the chorus of the aforementioned ‘Ill Ray (The King)’, I found the strength of his sound to be frankly stunning. I certainly hope he stays with the band for longer than just this tour, as much as I would like The Music to reunite for more than last year’s one-off show. 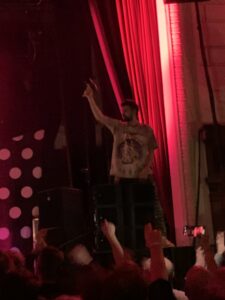 ‘ALYGATR’ was released just two days before the show as their first single since Serge’s step-up to lead duties, and the reaction to it tonight was as if it had been around as long as their other hits – including a large mosh pit during the final chorus. It is worth mentioning that Pizzorno wrote the vast majority of Kasabian’s tunes, so certainly don’t expect the quality of their festival-worthy choruses to be disappearing anytime soon.

The middle section of the set provided a chance for the group to show off their more electronic-based music, with interlude ‘Pinch Roller’ leading into ‘Treat’ being a particular highlight, supplemented with a brief (yet appreciated) moment of ‘Sweet Dreams (Are Made Of This)’ by Eurythmics. Kasabian proved they were more than a faceless 2000s indie rock band through the blaring synths exploding through the speakers, and both Harvey and lead guitarist Tim Carter (who had been promoted from a mere touring member previously) taking on keyboard duties. Now, you wouldn’t catch The Hoosiers or The Pigeon Detectives taking that sort of musical experimentation, would you? It perhaps explains how the group have fared better in popularity than some of their contemporaries of the era.

One minor disappointment of the show (other than being coated in beer) would be that there was a shorter setlist than previous shows on the tour, missing ‘Happiness’ and a personal favourite ‘Bless This Acid House’ which had both been performed at previous shows. It was not too much of a let-down as I didn’t notice this until the end, though I was looking forward to belting out “I get high for just one minute / I take my life and jump right in it.” The encore performances of ‘L.S.F.’ and ‘Fire’ highlighted just how much the long 18-month stretch from March 2020 suffered from the lack of live music – with Serge preaching how “Southampton, this is your moment” before launching into the largest pit of the night for ‘Fire’.

Overall, it goes without saying that not many bands would survive their frontman of over 20 years leaving, yet it’s clear that Serge has been a ready-made frontman for years; this show only further makes that apparent. With the addition of Harvey, I have no doubt that they will be commanding arenas and festivals for years to come.

Kasabian are on tour until the 4th November, with two dates in Brixton and a date in Birmingham also. You can get tickets here.