Pete & Bas' Southampton appearance had bass so extreme that it shook surrounding buildings and an impossibly lively audience.

Pete & Bas may be the strangest addition to U.K. grime, if not all of music, in recent memory. With a ‘combined age of 150’ years, according to their DJ after a specifically high energy track, they are the surreal embodiment of the long time running joke about the distance between the elderly and the latest trends in music – they are new music, but they are also not acting in a way that is disingenuous or mocking in the slightest- they really are just very good grime artists even if upon first sight the pair having a tour seems like a joke gone too far.

Coming to Southampton’s Engine Rooms after two years of delay due to Covid-19, fulfilling their long time promise to appear to their intense cult fanbase, Pete & Bas proved that they knew how to keep their audience extremely lively. In spite of the 7pm arrival time and the prolonged two and a half hour wait before they came out to perform (added to at the last minute when surprise guest Uncle Bal was announced!), the charisma and satisfying selection of grime tracks from their DJ worked wonders for keeping everybody engaged. Not least by playing a new Pete & Bas track for the very first time! 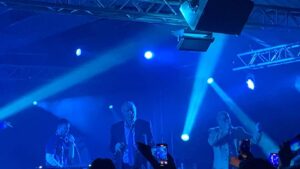 The other reason people remained so engaged was due to a wonderful surprise guest spot from the bizarre Norman Pain, who I had only heard of and was most definitely under prepared for. Walking out, once again, the instant reaction is to assume that we as an audience are the butt of a joke, but the excitement of the crowd over this guest was stunning. Pain certainly delivered, too, doing a few severely intense tracks that take what Pete & Bas are doing with grime and sees it through to a more bitter finale of horrorcore emo rap. Going introspective and speaking of ‘Chemicals in my veins’, he traverses marital issues and feelings of worthlessness – all blasted by a balding older man who undressed more on stage with each song he performed, eventually tossing his shirt into the crowd before giving a surprisingly wholesome thanks for the passionate chants of his name and leaving.

Some more waiting later, finally Pete & Bas arrived. With their stage presence being a mixture of comic and intense, the two bounce off of one another and their DJ beautifully with such great chemistry that it is hard to believe that the duo have only been friends for six years. Whilst the set was admittedly a little shorter than I would have liked, the high energy of each track was great. The selection of tracks performed was very good too, as the duo gave a selection of their most popular hits to date including their first track ‘Shut Ya Mouth’, their viral hit freestyle ‘Plugged In with Fumez the Engineer’ and the fun ‘Dents in a Peugeot’ which speaks of the pair’s success going from having a dented old car to a new Range Rover.

The most surprising part of the night was probably the absolute dedication that the duo and guests had to the fans. Given the relative aggression of their characters and frequent talk of violence (a personal favourite being Bas’ “I got fists like concrete slabs, still knock a man down with a kung-fu kick”), their wholesome approach to ensuring that their fans had a great time was truly endearing. Bas calmly explained throughout the show that afterwards they would be willing to wait and ensure that anybody who wanted signatures or pictures with the pair would get them, and once again apologising for the two year delay to the gig due to Covid. Norman Pain also, considering the extremity of his performances and of his music, seemed extremely thankful to be playing and made that clear to all.

The wonderfully eccentric Norman Pain during his guest spot, in the midst of taking his shirt off before tossing it into the audience. Photo: Reece Beckett

Between songs, they also kept things moving by inviting a small group of four volunteers onto the stage to engage in the ‘Basnog challenge’, spawned by the end of one of the duo’s music videos when Bas has a very specific drink of his own invention – a pint of lager with an egg cracked into it. After seeing how quickly the volunteers could drink Bas’ unique concoction, the group were also challenged to a dance off through the next track which saw the previously mentioned Uncle Bal really shine as he engaged so beautifully with the fans.

So, between the ridiculous amount of energy, the dizziness induced by the moshing, the gradual undressing of a group of old men set to almost back-breaking bass made for a wonderful time. Pete & Bas may seem like a joke on the surface, but the genuine quality of their music (particularly their lyricism!) proves that they are anything but. It is of course hard to tell how far they can go, but the intense dedication of their cult fanbase at this point is shocking, and well deserved by two ageing men from London who just thought that they should give grime a chance.

Pete & Bas’ ‘Lads on Tour’ tour is almost fully booked. Few tickets are left for the remaining shows, but they are available from the following link: https://www.ents24.com/uk/tour-dates/pete-and-bas

Listen to their runaway viral hit, ‘Plugged In W/ Fumez the Engineer’ on YouTube below: