Lauran Hibberd's infectious personality and high-energy performance made for an excellent night in live music.

Singer-songwriter Lauran Hibberd is undeniably a rising star in the world of alternative pop. She travelled down the road from her hometown on the Isle of Wight on Tuesday to play to Southampton’s music lovers. 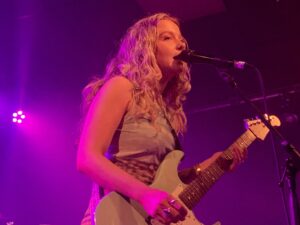 Supporting Lauran was Scottish post-punk group Dead Pony, who managed to bring a commendable amount of energy to the stage. With an addictive Scottish punk-twinge in her voice, similar to that of fellow Scots such as Honeyblood or CHVRCHES, lead singer Anna Shields commanded the room easily, inciting the early comers to move their feet to the grungy guitars and loud bass.

Moving seamlessly on from the loud performance of the support act, Lauran Hibberd stepped onto the stage with high energy right from the get go. Her opening track ‘Bleugh’, a perfectly witty slacker-pop track that sounds like it could be straight out of the early 2000s, set out the tone for the rest of the set: lively, fun, and slightly bizarre.

If Hibberd was not a singer, I think many in the audience at The Joiners would agree that she should try her hand at stand-up comedy. After her opening track, Hibberd quickly explained to the crowd that she and her band had eaten some “dirty pizza” prior to the gig, and so everyone should be ready to part the crowd, Red Sea-style, in the event that she should need to vomit. Fortunately, this didn’t happen – she powered through the rest of the set with a surprising amount of jumping up and down (considering the pizza). 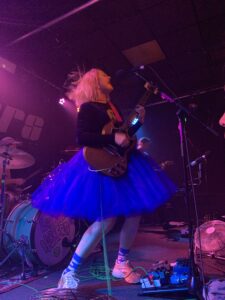 A highlight of the set was ‘Boy Bye’, in which Hibberd encouraged the crowd to put up their middle fingers during the chorus – which they did – as she sang ‘If I could lift you and hang you from the chandelier / If I could pay to forget, you’d make it disappear’. This kind of enthusiasm is what makes Hibberd so great: her not-so-serious, middle fingers in the air kind of attitude makes her incredibly relatable, and gives her music a flippant, yet sincere, tone.

Another example of this comedic attitude occurred as some of Hibberd’s band members began to drink Disaranno (straight from the bottle – classy) on stage – to which Hibberd jokingly remarked that “we’ve been on tour with the Vamps and now we sip Disaranno on stage”.

The penultimate track of the night was ‘Call Shotgun’, a fan favourite which presented some excellent opportunities for singing aloud during the chorus. It was at this point that the floor really began to move beneath my feet, as the crowd gave it everything they got – even forming a small mosh pit – for the singer.

Hibberd closed the evening with ‘Shark Week’, a lesser-known track from her 2019 EP Everything is Dogs. ‘Shark Week’ slowed down the mood considerably, and gave an insight into Hibberd’s sadder, and perhaps more philosophical side. A spotlight shone on Hibberd and her guitar as she sang the heart-breaking lyrics ‘I wish I could be what you want’, eventually breaking down into the outro (‘when did the world get big?’).

Lauran Hibberd’s performance at the Joiners highlights her impeccable talent and hard work, as both her music and hilarious personality were able to keep the crowd moving all through the night.