A lively, relaxed, and personal return to live music after lockdown.

I went to my first socially distanced concert, and it was AMAZING.

Apprehension coursed through my veins as I stood outside The 1865 in Southampton with some of my housemates on the 4th December. We were going to see one of my favourite artists, Lauran Hibberd, supported by Jerry Williams. I had seen Hibberd once as a support act for Hippo Campus and was excited to see her as the headliner, along with my housemates who hadn’t heard of her. We had arrived early so were quite far ahead in the queue. A man shouted some of the rules of the venue, if you break any of them, the band will stop playing until you follow them again, something I think would be much more effective than removing someone from the concert.

We went through the queue, through the bag checks, sign in and checking in on the NHS Test and Trace app before we were led to our seats, right on the front row. This was an instant win. We ordered drinks through our phones that were delivered to our seats. We were told to wear masks if we walked around but not at our tables. After taking some photos and selfies, Williams got up on stage. I wasn’t familiar with her music before the concert, but she was delightful. Very similar in style to Hibberd but slightly less rock. From the first chord on her guitar, I knew her music was awesome. As the air filled with smoke from machines, I could not believe the fact I was actually in a room listening to real, live music.

When Hibberd began to perform, I was beaming with joy. The lights in my eyes, smoke machine whirring and the loud guitar I could feel through my heartbeat had never filled me with such joy before, and I had never been so grateful to experience them. Both performers were very chilled, discussing how lockdown had been, how great it was to perform in front of a live audience again and asking the audience questions. It was surreal. Hibberd said that she thought it would be really weird but it was not, that she thought she would spend the whole time wanting to sit down and that we would spend the whole time wishing we could stand up.

Though it was not as strange as I expected, and I felt far more COVID-safe than being in a restaurant, I did feel more vulnerable than other concerts I have been to, mainly because there was no-one else nearby, so taking photos and filming felt slightly awkward. However, this was made less weird though by the concert photographers were rushing around by my feet, something I found very exciting as I could see the footage and photos on their screens as they were taking them.

Singing was allowed and it felt great. I felt unified with everyone even though we were two meters apart. Though it felt a little bizarre at the start, I soon settled into it and the atmosphere and had such an incredible night.

The situation is ever-changing but if the tier you are in allows you to go to a socially distanced concert, (you feel comfortable to do so and don’t have symptoms, of course), I would definitely recommend it. It was not as weird as I expected, I felt incredibly safe and I was so glad to see live music again. Oh, and you should definitely check her out. 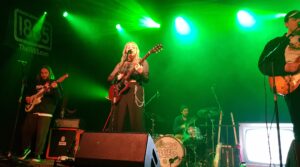