A hot and sunny close to the weekend and summer.

The final day of Victorious Festival rolled around far too quickly for my liking. Nevertheless, the excellent weather persisted and Sunday afternoon’s special guest Ziggy Marley quickly sang away any sad feelings. The first of Bob’s eleven (acknowledged) children followed in his father’s footsteps having gained musical acclaim, firstly with his band ‘The Melody Makers’ and then as a solo artist. His set managed to lift the spirits of everyone, even the most hung-over. Playing a mixture of his own music and hits written by his father (‘Jammin’’) and The Wailer’s (‘One Love’). Ziggy ended with an extended version of ‘Look Who’s Dancing’, a song he wrote with the Melody Makers, in which his backing singers became front of stage dancers as Ziggy and the crowd chanted their names “Natasha, Natasha, Natasha” and “Tracey, Tracey, Tracey” to the beat.

Temperatures continued to soar throughout the afternoon which prompted the Bog Rolling Stones’ frontman to admit to the crowd that he wished they were a Beach Boys cover band instead. It was nice to see an abundance of sun cream provided on the tables outside welfare, just in case any festival-goers had forgotten to bring their own. Mid-afternoon and Band of Skulls took to the main stage to rock the Pompey crowd. The band were doing well till they admitted they were representing Southampton as that “small town down the road”, which was met with a flurry of “boos” amongst a few dispersed “woos”. Nevertheless, the three-piece outfit continued to keep heads nodding in the heat particularly with fan favourite ‘I Know What I Am’. 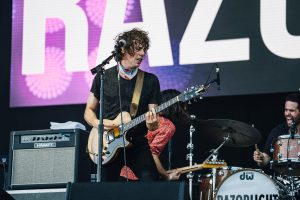 The main stage was graced with back-to-back indie rock giants, the first having supplied their biggest hits in the noughties while the second supplying theirs in the tweenies (what I like to refer to the last ten years as, not sure about everyone else). In fitting chronological order, Razorlight were first up providing plenty of fan favourites from their first two albums – Up All Night and the eponymous Razorlight. Funnily enough, nothing from the third album, Slipway Fires came up (I wonder why…?). A couple of songs from their fourth album released in 2018 (which I must admit I did not know existed) were entangled in the setlist, namely ‘Midsummer Girl’ and ‘Carry Yourself’. I personally enjoyed the use of the double bass peddle in these tracks, something classically resigned for heavier styles of rock. The band unsurprisingly ended with ‘America’, a song in which even those who don’t know the name Razorlight will know the words to.

The Vaccines are of course the tweenie indie giants I’m referring to. The band played a similar but shortened, festival version of their February set at the Southampton Guildhall (which you can read my review of here, if you feel so inclined…). Despite little crowd interaction (presumably to make their way through four albums worth of hits) frontman Justin Young’s charisma shone through by way of his energetic performance at times wielding guitar and at others with purely microphone in hand.

Plan B took to the main stage for his sub-headline set although I think someone forgot to mention to him that Victorious is a ‘family-friendly’ festival with every piece of crowd interaction possessing at least one expletive. To be fair, the man’s music is eloquent and was enjoyed by many, so I think he gets a pass… Elsewhere, it seemed as though every young person who wasn’t too young to be accompanied by an adult was occupying the ‘Beats and Swing tent’, which had predominantly drum & bass DJs playing. At least every time I wandered past that’s what I could hear and of course, could see a security guard skanking. Therefore, I was surprised that Henge, intergalactic providers of an extra-terrestrial blend of electronica, ska, prog rock and psychedelia, were going to be landing on this stage. Nevertheless, the crowd loved it with mosh pits spontaneously forming everywhere. No wonder that Henge were voted ‘the best live act’ at the UK Independent Festival Awards in 2018.

The time had now come for New Order to draw the curtain on what was a sunny weekend of awesome acts down on the south coast. Their set consisted of everything you could ask for from the Manchester band, from a fantastic light show to clever banter between band members. Swiftly into the set, lead singer Bernard Sumner asked if there were any Joy Division fans in the crowd, which was met with a huge cheer before the band broke into ‘She’s Lost Control’ and ‘Transmission’ back-to-back. I recalled seeing two men earlier in the day, one wearing a Bob Marley t-shirt, the other, wearing that famous ‘Unknown Pleasures’ JD tee and I questioned whether I’d entered a parallel universe where both were still around. The band then blasted more recent hit ‘Tutti Frutti’ to bring me back into the electro fuelled session. I dipped momentarily from their entrancing set to check out Basement Jaxx DJ’ing down on the seaside stage, which seemed like a non-stop boogie that I would very much like to have stayed for, but sometimes you just have to prioritise at festivals. Thankfully I made it back in time for two of the band’s greatest hits, ‘Blue Monday’ followed by ‘Temptation’. Anyone flagging by this point was soon perked up by the thumping beat of the former and then again by the sumptuous riff of the latter. New Order were only supposed to play one song as an encore. However, they were granted extra time and so ended with two more hits (‘Atmosphere’ and ‘Love Will Tear Us Apart’) from the band they grew from the ashes of.

Victorious festival is the perfect weekend for those who would rather spend their bank holiday weekend listening to a mixed line-up of brilliant bands and amazing artists rather than stomping tech up at Creamfields or watching GCSE kids consume their first alcopop at Reading & Leeds. An easily accessible and family-friendly festival which isn’t extortionately priced; I will most definitely be attending again next year.