One big sing-along from some indie legends and big names in popular music.

Day two of Victorious Festival just couldn’t come round soon enough! Victorious has recently given the option for festival-goers to camp at an offsite campsite, however, having my own bed and a shower and knowing that I could get to the festival from Southampton in under two hours was magical. Arriving at the festival on the second day confirmed to me something I thought I had noticed on day one… Victorious had hired perhaps the friendliest security staff of any festival I had been to! It was a pleasant change to be greeted with a friendly smile and hello rather than a look of intimidation and grumpy pat-down. On multiple occasions, I spotted security staff bopping to the music which filled their eardrums with a smile on their face, subsequently putting a smile on mine.

Early on in the day, indie legends The Rifles played a string of early album bangers at what seemed a slower tempo compared to the records. I know they have been around a while but they are hardly getting old! This was prior to Professor Green amassing a huge crowd at Victorious’ second-largest stage, named the Castle stage, quite fittingly as its positioned next to Southsea castle – an artillery fort originally constructed by Henry VIII in 1544, for those of you who enjoy a bit of history. I could not work out if we had a high proportion of Pro Green fans at the festival or if people were arriving early to get a good spot for who was to follow the Hackney-based rapper.

Now, I didn’t catch Lewis Capaldi as quite frankly I only know of him for his hilarious social media presence and not his music but I have read news articles about him absolutely smashing his set and ramming the Castle stage to the brim. He should probably have been a main-stage act, perhaps the festival organisers did not predict his surge in popularity prior to booking him. I did get my fair share of soppy love ballads though as James Bay took to the main stage just before to sunset to play his sub-headline set in the tightest fitting skinny jeans you’ve ever seen in your life. He stole the crowd’s voices and hearts, particularly when he and his band covered Tina Turner’s “Rolling on a River” as his penultimate song, ending as he usually does with ‘Hold Back the River’ from his GRAMMY-nominated debut album. Disco funk band Barbudo (meaning ‘bearded’ in Spanish) also deserve a mention for their groovy performance in the ‘People’s Lounge’, which was basically a small stage decorated like someone’s living room. I’d witnessed them make a room of thirteen people get down at Heartbreakers in Southampton earlier this year so it was nice to see them draw a larger crowd at a festival so that more people could appreciate the wonderful music they create. 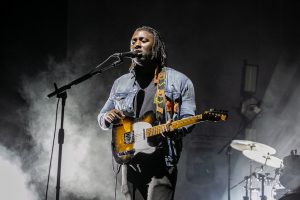 As the second day drew to a close and Rudimental took over on the main stage to drastically raise the average BPM for the entire festival, indie-rock royalty Bloc Party blessed the Castle stage with a full rendition of their first album Silent Alarm. The album was played in reverse order, which in my opinion worked very well live as it allowed the band and the crowd to warm into it. Beginning as a slow bop to ‘Compliments’, the set seemed to grow in pace and power as lead singer Kele continually questioned the crowd’s sing-along capabilities, obtaining louder lines from them with every ask. The set finished, as those who know the album, with the raucous riffs and powerful drumming of the album’s opening track ‘Like Eating Glass’. The band exited, and that would have been enough, yet they returned to the stage to please the crowd with an encore of top hits, both not from the first album, called ‘Flux’ and ‘Ratchet’.