An excellent Friday night party to begin the weekend.

Easily accessible by three railway stations within Portsmouth and only a stones throw away from the sea, Victorious festival has established itself as the bank holiday weekend festival for the south coast. Extending itself from a two-day event to a three-day extravaganza in 2017 the festival attracted three huge headliners (Two Door Cinema Club, Rudimental and New Order), who could have easily headlined Reading & Leeds if they wanted to. Official figures are yet to be released but it is estimated that over one-hundred-and-twenty-thousand festival-goers descended upon Southsea common for a weekend of top, top music. 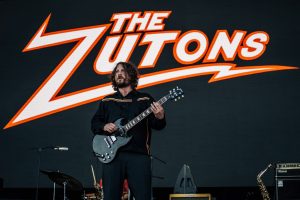 Friday is supposedly a ‘lighter’ day with only four stages open, but with the likes of The Zutons, The Specials and Two Door embracing the main stage, I’d argue with this. The Zutons got the crowd going with huge sing-along hits ‘Valerie’ and ‘You Will You Wont’ before ska revivalists and legends, The Specials, played a set infused with early classics alongside several from their new album, Encore. Understandably, some in the crowd were annoyed when the band announced they were playing new material but quickly began to bob their heads as they discovered their sound had not been tampered with. Notable songs from the new album included ‘Vote for Me’, ‘Embarrassed by You’ and ‘Ten Commandments’, which featured special guest Saffiyah Khan, model and activist who attracted the band’s attention initially when she was filmed standing up to EDL supporters whilst wearing a Special’s t-shirt. The band pleased the crowd by ending with ‘Monkey Man’, ‘Gangsters’ and ‘Too Much Too Young’ with not a person in sight either singing along or two-stepping (most did both…).

Drawing the first day to a close, Two Door stepped up to the stage to follow the legends. They did not disappoint; it was a non-stop dance party and sing-along from start to finish. I don’t know how they did it but they managed to fit almost the entire first album Tourist History into their set, whilst also incorporating hits from albums two, three and their latest record False Alarm. The band finished as they normally do with ‘Sun’, whilst fireworks lit up the Southsea sky. I must also mention a band called the Tin Pigeons who I discovered on one of the smaller stages, named the ‘World Music Stage’. Having been granted an additional fifteen minutes to their set, the lead singer admitted they were under-prepared as he whipped his phone out to check the rearranged setlist – at least he owned up about it! They are an up and coming indie-pop band with certainly a lot of potential who I’d definitely recommend checking out.