Despite the many red bulls required to stay awake after the 5am finishes of each night, the final night of 2000trees was extremely fun.

By the third day of 2000trees, I was wearing a bit thin as the entertainment continued until about 4am every night – and with no disconnect between camping and the festival then you could wander freely amongst the different camps often with musicians performing acoustic sets at the various camps. Also, White Russians and Waltzers don’t mix… I’ll just leave that there.

I did, however, manage to surface in time for Vukovi’s set and I was so glad that I did. Vukovi are a band from Glasgow and I must say the leading lady’s personality shone through when she was on stage. It was lucky I had my Scottish translators with me to let me know “a fucking raft I’m gon be on that” meant “a crowd marine vessel I shall sail that”, otherwise I’d be lost.  Overall, I think I found the intermissions the most entertaining, but they were a good watch for two pm on the last day of the festival. They’ve played three years in a row and each time they’ve gone up a stage – they started a fridge chant to get a bloke dressed as a fridge into the middle of the pit saying “has he fucking shat it?” But he had not and eventually she ditched the microphone and got in there with fridge man.

I decided to try something different so hit up the ‘The Word’ tent where there was a session with the Extinction Rebellion people. I didn’t really know much about it other than the protests that had previously happened in London so I was curious to see what kind of ‘performance’ that would be. I began sitting at the back – as much as I love a discussion about the environment, I wasn’t sure how ‘audience participation’ heavy it would be so I let the rows of hay bales fill up in front of me. There turned out to be sections around the country consisting of various ages that would form under the banner of ‘extinction rebellion’.

We had a discussion about how 2000trees could be improved in terms of sustainability, things like improving the disposal of food waste, the bringing of compostable porta loos instead of ones that use chemicals and also bringing in the litter bags that other festivals such as Boardmasters use, which give you a £10 bag if you bring a full bag of rubbish with you as you leave. It definitely led to interesting discussion since there was such a range of ages and personalities that everyone could contribute a different point of view to the discussion which was something different that you don’t always get with discussion within a university setting for example. 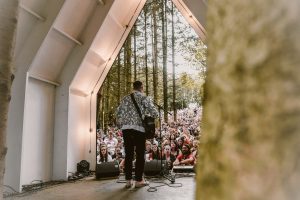 Deaf Havana (or rather James Veck-Gilodi) did an acoustic session in the Forest Stage – it was such a vibe and it was packed to the max with everyone sitting on every available section of ground, tree root and standing flush to every barrier. I was lucky that I squeezed in right into the middle and had great seats and soon got to know the people around me since we were all practically sitting on top of each other. With the wind going through the trees, the acoustic set and everyone singing along, it was so relaxing. He joked that he didn’t know the words to most of his songs and for a lot of the set it turned out to be true – rounding off with a cover of ‘Angels’ by Robbie Williams was great, and it had everyone singing along.

I was so so impressed with this festival – I wasn’t sure what to expect when I was on my way there and I was nervous about going on my own. I have never felt such a welcoming feeling at a festival, with such a wide range of people who were willing to chat with you about everything from music to sustainability with no hesitation. I honestly hope I get to go back next year because when that feeling of an independent festival is matched with a great line up – nothing can beat it!

2000trees returns to Upcote Farm next year from Thursday the 9th to Sunday the 12th of June. Check out the video below for a perfect overview of stuff you might find next year at 2000trees!