Despite Friday morning proving a struggle to get out of the tent after Thursday night's antics, the second day of 2000trees provided some quality music.

Friday morning is when I realised the danger of the cashless system at the festival, and that the budget for the festival had all been spent on White Russians and 3am waltzer rides. I was feeling a bit slow on Friday morning, but I made it to everyone I wanted to see.

Pulled Apart by Horses first played 2000trees in 2008 and have come back every year since. I especially loved the guitarist saying “fuck hydration” and throwing a lager into the crowd – it was quality entertainment. These boys have hairography down to a T – fashion choices and all just made them absolutely look the part. Their tunes perfectly fit the mood of the moment. His vocals are impressively high when he’s sustaining them over a whole set, and they premiered some of the new songs they’ve been writing – it was a perfect mix with their old bangers I remember seeing at Hit the Deck festival in Nottingham many moons ago. They ended the show with the banger that is ‘High Five, Swan Dive, Nose Dive’, with the lead guy crowd-surfing whilst playing his guitar. 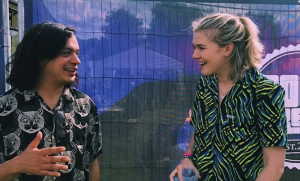 I met Sam Duckworth from Get Cape. Wear Cape. Fly in the VIP area (or more, I stared at him for a while across the VIP area whilst slightly hiding behind an armchair). Turns out one of the guys that we were camping near was actually his friend, so he could confirm to me that it was in fact Sam Duckworth and made nothing of suggesting to me that I should just go up and chat to him. Downing a White Russian which seemed the drink of the festival, I then preceded to ‘casually’ wander over to him. What mostly came out of my mouth was “ndjaiphfaneipla” which roughly translates to “Hi Sam, I’m a big fan – please can I have a photo with you?” – being the true journalist I am, I then preceded to just make noises of adoration rather than actually ask him any questions. But overall, I think I came across as cool.

Seeing them, we arrived ridiculously early, and so were waiting at the front for all the awkward eye contact I could give him during the sound check. The ska set up with a trombone, trumpet, synth, bass, keyboard, acoustic, electric guitar and drums – how they all fit on the stage was a wonder. They were better live than when I listen to them at home, so I don’t know how I’m going to go back to listening to them any other way. It was nice how they wanted us to dance and I’m not sure how so many people managed to stay still – I will say that Sam transformed on stage and became a commandeering personality that owned and controlled the set, which was a big change from the shy person I met in the Press area. 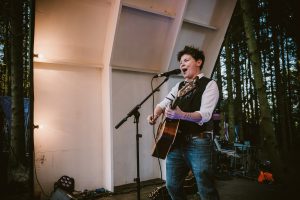 Grace Petrie was another artist that apparently has been around for ages but I didn’t realise. She overcame the technical difficulties during her set like a pro and gave us an acapella song about Galway which, thank the lord, was genuinely hilarious. Her witty remarks made the audience putty in her hands as we waited for our Theresa May ballad – the 31 year old folk singer from Derbyshire smashed it with angry yet funny lyrics in a talk-singing style. She seemed to be able to put complicated issues into a simple and catchy song, and it felt like we were all her friends. She called for audience participation whilst she sang ‘Black Tie’,  particularly the part: “the images that fucked ya are a patriarchal structure”. It definitely made you think whilst listening to her – whoever says that Taylor Swift song is a gay anthem needs to listen to Petrie’s songs.

I have never seen anyone lift a double bass above their head whilst playing like when I was watching Skinny Lister. It didn’t matter if you were at the front, people were going to make a party wherever they were. This was more my kind of accordion, there was football stadium level chanting to the songs, and even though the axiom isn’t the biggest of stages it was packed beyond the borders with uniform jumping to the beat and crowd surfers to boot – in fact, someone was carried out to the first aid station about 10 minutes in but everyone just carried on at it.

You Me At Six were probably one of the best live performances I have ever seen, the frontman was mad. I have honestly never seen that level of consistent energy on stage – I am not even a massive fan of their music but the production value that they gave was amazing. I was so tired but I had to make my way into the pit, donuts in hand for a few songs before stumbling to the side because I just couldn’t keep up with his level of energy. It was literally electric, the entire vibe of the stage changed specifically for each song in terms of lighting – as well as his singing styles, the way he addressed the audience between each section and the way he used the stage. I was very impressed and so was the entirety of the crowd – I didn’t know I was a You Me At Six fan but now I think I am.