With the performances of Frank Turner and Clara McHugh, coupled with some 3am Waltzer rides, the first day of 2000trees was most definitely 5-star worthy.

I had a bit of imposter syndrome driving into 2000trees with ‘VIP’ on the dash of my car but it felt good – the separate bar area was masquerading as a bohemian living room but there seemed to be no fixed groups, just people lounging everywhere.

I sat down with a lager in a reusable served by a lady with the kind of haircut I’d love to have (but my mum would kill me over) and planned my day and the acts I wanted to see – I must say, the majority of them I didn’t know but I was working off a few recommendations.

I followed the mass of people flooding towards the main stage and I found they were going to see Puppy, whose first time it was on the main stage at a festival. I was impressed by how they adapted to fill a bigger stage and they certainly draw the numbers for a 15:30 set! There’s a range of people at 2000trees, from families, to 16 year olds, to cool kid uni students to 40 year old rockers – but the small and independent feel of the festival definitely makes the mess of people feel comfortable and welcoming.

Seeing Milk Teeth came as a better surprise than I thought – I had heard a few of their songs but the stage presence really made them into bangers. The leading lady’s confidence on stage commanded attention and I was more than willing to give it. The crowd seemed to love the circle pits and crowd surfing demands they were making, for a 16:00 set it felt more like 23:30 by the vibes that were being flown about.

I thought a change of pace was necessary after Milk Teeth so I thought I’d check out the Forest Sessions stage. Holiday Oliver was playing, and I wasn’t sure whether his stage character was the result of nerves or was something he was doing purposely. It led him to draw out some audience participation, reiterating the friendly and relatable content of his songs. They gave me young Frank Turner realism with a bit of a Jake Bugg twang, and I must say I did enjoy him singing about everything, from not wanting to check his phone to Brexit. 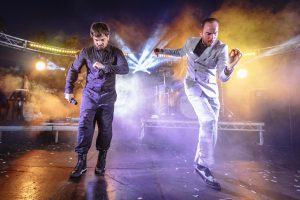 Back in the Cave, De Staat are a major vibe. The lead singer was wearing a double button breasted suit (they’re from the Netherlands, just for context). They were perfectly suited to the cave stage as they had everyone dancing, and it gave me American pie vibes. The three guys’ voices blended together so well – they kind of remind me of Confidence Man. In terms of performance style, he had complete command over the crowd who were just living for those dance routines, especially to ‘KITTY KITTY’.  They kept the energy level up throughout the entire set, and it was great to watch. Kind of a mix between rock and soft dance, but these were definitely some pits I had to join because it is impossible to sit still to De Staat! They’re back in England in November and I definitely will be making the trip to see them, as they’re one of those bands that listening to the released songs just can’t compare to seeing them live. 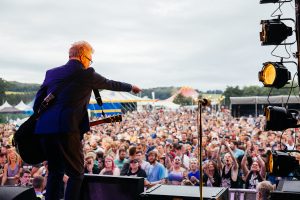 I met some Scottish guys who described Flogging Molly as “very Irish, very fantastic – its ceilidh with power chords”, so I couldn’t miss that when they went off to go see them. Obviously, I now know that they are majorly famous and I had just been sleeping on them. A bit too much accordion for me (and not in a Mumford & Sons kind of way), but I liked when they played the accordion like a synth, as it made for some pretty cool sounds. I must say I didn’t realise how popular they were, but apparently they’re cruising with Frank Turner this year around the Americas. Even though we were at the back of the crowd, they were great for making you feel involved in their music and got you dancing.

It’s a shame that While She Sleeps and Frank Turner clashed because they’re both great, but I had to choose on the side of my man Frank. Luckily, the other Scottish guy was Frank’s biggest fan so he didn’t at all mind staying right at the front for the intermission, so we were super close for when Frank graced us with his presence. 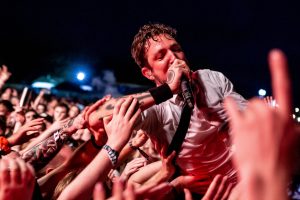 I must say, it was amazing and I’m so glad we were right at the front. It started off just shouting his words back at him but the energy kept building to the point where you couldn’t stand up straight. I did fear for the young girl who was at the barrier with her parents but it moved away from the barrier when he started shouting for a circle pit to form – this was one I couldn’t miss and I literally fought to get there and dived in – it was awesome.

It was a perfect blend between the various different types of songs he has from more rock vibes to acoustic vibe – and his speaking interludes only added to the performance, there was no feeling that you were waiting for anything. He’s not afraid of crowd surfing, and at one point his sweaty torso landed directly on my face as for some reason I didn’t use my hands because I was too busy just watching. He did lose his battery pack and earpiece, but the girl next to me lost her shoes, so I think she wins. Overall it was a great show and you could feel the love for Frank.

We then headed to Forest Sessions as that still had acts playing, and this is where we saw Clara McHugh  – the two Scottish guys I met said she was someone I ‘had to see’ and they had run into her practising for her set earlier in the day at the campsite. Her voice was ethereal and in the forest setting, it was a perfect way to drift off with a White Russian after the sweaty madness that had been Frank Turner. The highlight was definitely when she brought her friend and bassist Oliver Ross on to play with her, the lightness of her voice and the song that was then grounded in a bass accompaniment was an amazing combination.