You had to be there. Blossoms' gig in Southampton's O2 Guildhall was high on energy, emotion and sheer power. My head's still ringing.

It was when I noticed everyone around me singing in unison to Oasis‘ ‘Supersonic’ blasting out on the sound system between sets that I knew this was going to be a special gig. When you see people crowd-surfing to a band who’s not actually performing, what does that say of the atmosphere when the main draw take centre-stage?

Let’s back up a bit. Currently embarking on their headline UK tour to promote the release of Cool Like You released earlier this year, Blossoms came to the south coast on a cold, breezy Southampton night to utterly rock the O2 Guildhall. Bringing along support acts Whenyoung and Fuzzy Sun, it proved a night to remember.

But let’s begin with the venue. Southampton’s O2 Guildhall – as you’re probably aware if you’ve read many gig reviews on this site – is the perfect hall for intimate, closed-roof arena rock. Spacious enough to allow the sheer sound of the performers to reverberate throughout the crowd down to your bones, yet compact enough to bring everyone seemingly within touching distance of their favourite band, there was perhaps no better place to witness Blossoms unleash their unhinged brand of audacious synthy indie rock on their fans. At least it certainly left a strong impression on me.

Before Blossoms could take the stage however, we had the warm-up acts. It’s a tough job – crowds are rarely willing to give the opening band a lot of love, saving it all for the main event – but Whenyoung and Fuzzy Sun pulled it off with aplomb. Perhaps assisted by the qualities of the Guildhall, Whenyoung brought an exhilarating performance of hard indie rock, positively shaking the walls with the power of their bass and drums – to the extent that I wasn’t exactly sure how Fuzzy Sun would top them. But top them they did, delivering much more upbeat vibes more in the vein of Blossoms’ synthy goodness, treating us to an assortment of tunes from their two EPs as well as a couple of as-yet unreleased tracks. Stay tuned for Fuzzy Sun in the new year, if you’re at all a fan of Blossoms’ lighter tunes.

It was at this point that the person operating the sound system started having a bit of fun. The Strongbow Dark Fruits lads that were making up the majority of the Guildhall’s attendance were getting restless for the main event, and had seemingly had a few of their favourite beverage. Cue the Courteeners‘ ‘Not Nineteen Forever’, The Human League‘s ‘Don’t You Want Me’ and of course, Oasis’ ‘Supersonic’, and it was as if we had been transported to Reading Festival‘s headline set. Then on came Kanye West‘s ‘Black Skinhead’, a heavy dousing of smoke and some impossibly raucus strobe lighting. On came Blossoms. 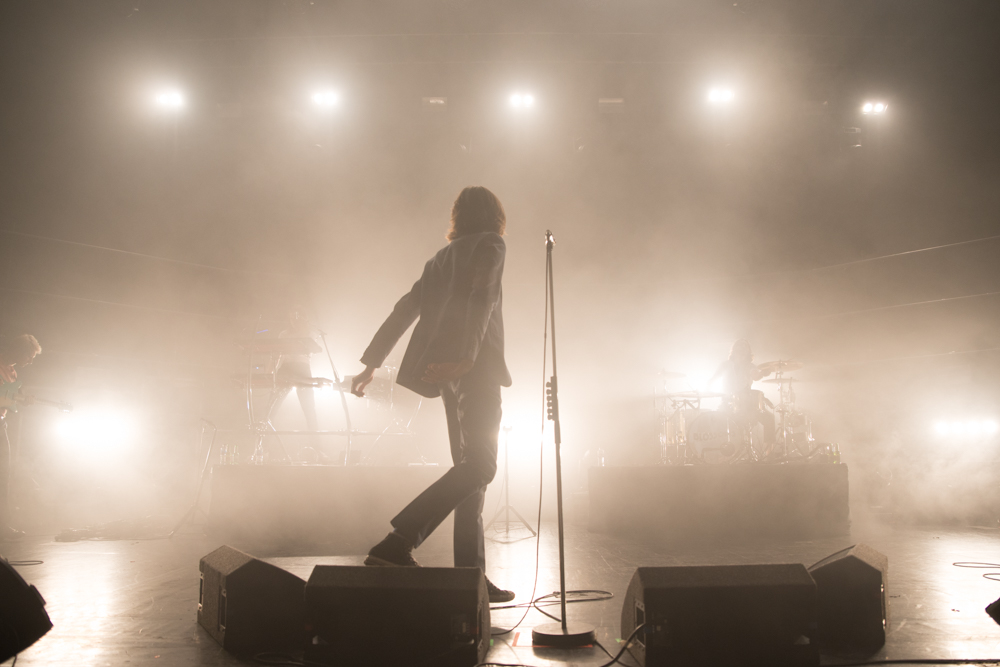 Much as I have faith in my writing abilities, I’m not quite sure I can do justice to what happened over the next 60 minutes or so. Opening with the terrifically gripping ‘I Can’t Stand It‘, Blossoms let us know from the get-go that this was going to be a heavy gig, utilising strobe effects and pulsating basslines contrasting with punchy synths to draw in the crowd before blowing us away with anthemic choruses and utterly electrifying guitar riffs. At one point someone in the crowd let off a flare, only adding to the sheer madness of it all; at others you could hardly see the stage for the number of people crowd-surfing and sitting on other people’s shoulders. There was no mosh pit, but even so it was utter balls-to-the-walls insanity.

At the centre of it all was Blossoms frontman Tom Ogden. The remaining members of his band may have come and gone, but his natural charisma and confidence absolutely led the show. The highlight of the night came when the rest of the band simply exited the stage and left him to it, just a basic acoustic guitar for company. Leading us through a medley of other artists’ hits, from ‘Last Christmas’ to ‘Don’t Look Back In Anger’, at times not even playing or singing and instead conducting the crowd like an orchestra, Ogden was the master of the evening and the architect of one of the greatest live performances I’ve ever seen.

There wasn’t really an encore. Perhaps Ogden needed a quick break before returning to the stage to light the room up again with ‘Charlemagne’, ‘There’s A Reason Why (I Never Return Your Calls)’ and an utterly dominating performance of ‘At Most a Kiss’, but this wasn’t an emotional second goodbye in the manner of most encores. If anything, it was like Blossoms were trying to crush the crowd under the weight of such unrelenting, intoxicating indie rock so that we’d crawl home at 4am and spend the next day curled up in bed trying to work out quite how we got here. It certainly did the trick. By the time the crowd finally filtered out of the Guildhall – chanting along to ‘Dancing Queen’ no less, the sound system guy having some fun once again – my head felt like it had been through a meat grinder, then blown up with dynamite, then put through a meat grinder again with some bricks for good measure – but in the best possible way.

I’ll be honest, I wasn’t the biggest fan of Blossoms, and I was excited but not expecting huge things, going into the Guildhall. But holy shit, that gig was pretty fucking awesome.

Blossoms are currently embarking on their winter headline tour. You can book tickets here. See images of their Southampton performance, taken by The Edge‘s Peter Walker, below.