In a flood of colour, energy and dynamism Pale Waves and their support acts give a vibrant performance worthy of more than their withdrawn Tuesday night crowd.

As the October tides drift into the waters of Southampton, they bring with them a different type of wave; a fresh and fun surf of pop-infused indie that threatens to consume all in its path with a tsunami of upbeat sing-a-long joy. The ever-flowing current in question is that of Pale Waves, a Manchester formed four-piece who are creating waves of their own.

Following the release of their vibrant debut album My Mind Makes Noises, the quartet sold out six of eight headline shows leading up to their October 2nd show at Southampton’s O2 Guildhall, a run which would suggest an upsurge ready to flood the halls of the prestigious venue. Pale Waves definitely brought the tide with them too, delivering a colourful, energetic and gushing river of a performance which embodied everything great about a band on the rise. The only shame is that, through no fault of the night’s performers, much of the Tuesday night crowd felt more suited to a gentle stream.

The proverbial flood gates did appear to be opening early however. Late-comers will have been bitterly disappointed to have missed out on the unhinged and riff heavy charisma of first support act King Nun. If they weren’t on your mind before they very much were after. Combining a psychopathic electricity with a local lad charm, lead vocalist Theo Polyzoides proved truly magnetic, using the stage as his demented playground and toying with the audience in his colloquial chaos.

Swimming Girls soon followed, a Bath group with a far closer through-line to the evening’s headliners in their 80’s dream pop vibes. Bringing much needed intimacy to a somewhat frail crowd, they offered the perfect appetizer and plenty of reason to keep them on your radar. Recent release ‘Beneath You’ and the infectious ‘Asking For It’ remained rooted in memory even after Pale Waves had delivered their contagious choruses.

With plenty of time before Pale Waves were to crash ashore, the Guildhall was given a chance to fill. It felt pretty clear from the get go that the room had a Tuesday night vibe, the bar remained relatively desolate and there was a certain lack of dancers among us. Southampton being one of Pale Waves’ few gigs to not sell-out unfortunately presented the evening with its only problem. Although a spacious crowd is not always a bad thing, the gaps could be felt most when Pale Waves had those present jumping; losing something in the spaces that can only be felt when a whole audience dances shoulder to shoulder. 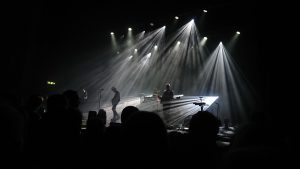 Though, it’s an issue easily overlooked in the presence and wonder of a band having so much fun. Stepping out to ‘Television Romance’ in a haze of smokey red and white light, Pale Waves announced themselves to the Southampton stage with all of the neon drenched dynamism that their sound suggests. Following from King Nun’s audacious opening and Swimming Girls’ strong follow-up, Heather Baron-Gracie completed a trilogy of memorable lead performers. Her stage presence, complete with zombie-like twitches to drummer Ciara Doran’s perfectly executed rhythm and her iconic look, practically filled the spaces in the crowd.

Following quickly with one of many sing-a-long hits ‘Eighteen,’ and soon after, a touching tribute to a Southampton fan whose wife carried him through hard times used to introduce ‘Came in Close,’ there was a brilliant balance of party and personal throughout the set. Gems of My Mind Makes Noises ‘One More Time’ and ‘Kiss’ glistened to full effect and closing track ‘There’s a Honey’ had the biggest reaction of the night in a final foray of oneiric pop and strobe. It felt a fitting hour for a band oozing with spirit, intensity and potential that offers a telling landmark of their incline from their Joiners gig just under a year ago.

While Pale Waves continue their ascent, they continue to prove themselves as an exciting prospect in the indie scene. A band with as much humble obscurity as showstopping star power and a promising upcoming US tour, the ripples they are creating seem likely to spread into international seas. And, if their latest gig here in Southampton is anything to go by, the waves being made in indie music right now might just be pale.

Catch Pale Waves at any one of their other tour dates by following the link here.