An eclectic mix of the nostalgic and bizarre, sprinkled with some legendary bits, Saturday had something for everyone to enjoy.

With the most heterogeneous line-up on the face of Earth, combining ‘70s legends, parody acts, DJs, MCs and the freshest indie artists, the first day of Common People was not one to be missed. I plunged into it without knowing what to expect, but very ready to enjoy a weekend’s escape from exam revision and responsibilities only 10 minutes away from home.

And that’s exactly what I got. The famous festival vibes hit as soon as we got there: a ferris wheel, a helter-skelter, loads of flags, and the most colourful parasols made our green Common look more vibrant than ever, and it turned out we got there just in time for a trashy treat: Elvana, all the way from Disgraceland.

Okay, if you’ve never heard of these guys, you’re missing out on one of the two most ridiculous things ever (keep an eye out for the other one in tomorrow’s review). The self-described ‘Elvis-fronted Nirvana’ were there to wake us up with Nirvana’s most famous songs including ‘Smells Like Teen Spirit’ and ‘Lithium’, as well as some of the King’s best known choruses in a very ‘rock without the roll’ manner. I can’t say I’d like to hear that again, but as our Elvis said, “check us out if you wanna hear more of this mindless shit!”

We took a trip to the cool, blue tent of the Uncommon Stage for the second gig of the day, Winchester’s Josh Savage.  Having supported the likes of Catfish & The Bottlemen, and with a new EP to be released later this year, Josh’s career is on the rise. As well as giving us a sneak-peek of new material, he played some tracks from his debut EP Spaces and more recent singles such as ‘Ghosts’ and ‘Whispers in the Snow’, effortlessly capturing the intimate venue with only his voice and a guitar (and his sister Aniya as his understated accompaniment on a drum and backing vocals). Think Plus-era Ed Sheeran – pure music and goosebumps-inducing vocals. This guy was an instant addition to my Spotify playlists and is definitely one to watch.

This is where the day became a bit drowsy – the combination of the scorching heat, the slightly too experimental set of The Plastic Mermaids (the guy started the set singing into a megaphone and seemed to be playing what looked like a typewriter balanced on a ladder), and DJ group FooR jumping around to electronic remixes of massive hits definitely cut me out of what they called ‘energy crew’. However, count on The Sherlocks (and a grilled cheese toastie) to wake you up if the heat is getting you down.

After extensively touring the UK, the launch of The Sherlocks’ debut album Live For The Moment firmly established them as up-and-coming alternative rockers. Their set definitely reaffirmed that: with guitar-heavy hits such as ‘Live For The Moment’, and ‘Chasing Shadows’, the Sheffield-born band rocked the Common Stage from beginning to end. They also introduced their already steady fanbase to a track from their upcoming album, and gave a shout-out to everyone’s favourite local venue The Joiners. The Sherlocks have definitely found their style, and it will be interesting to see if they choose to go safe or mix it up with some less roaring tracks for their next record.

Nobody could have prepared me for the next act. Clad in pink, American duo Sparks were next to bring some ‘70s electronic beats onto the Common Stage to please all generations. It was fantastic to see that after 23 studio albums spanning over 40 years, lead singer Russell Mael still had 10 times more energy than any university student ever. Contrary to his brother, pianist Ron Mael had an enviable composure throughout the performance – I swear he hardly moved a muscle except for his fingers across the keys! The contrast between the two was the most captivating thing about their set… until Ron got up and danced for what was potentially the lengthiest jaw-drop of my life. Check out his moves here to see what I’m talking about; you won’t regret it.

Throwback time continued with girl group All Saints. Nicole, Melanie, Shaznay and Natalie brought us all back to the simpler days of the late nineties/early Noughties with their lovely harmonies, sleek moves, and some smooth pop. Despite them joking about how old they are, the entire performance was fresh and completely in tune with the vibe of the crowd. Playing a variety of covers, newer songs, and classics such as ‘Never Ever’ (the second best-selling girl group single of all time!) and ‘Pure Shores’, All Saints left me thinking we could really use some more girl groups around in this girl power era. 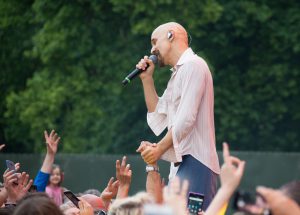 Next up were Mancunian indie rockers James, another band whose music spans over three decades.  They were obviously there to enjoy the tunes – and that atmosphere transferred to the crowd, who eased into their guitar-heavy songs one by one.  Lead singer Tim Booth absolutely stole the show. His dancing was unparalleled (I genuinely believe he underwent catharsis at some point), and he constantly engaged with the people – almost to the point of crowdsurfing. Things got a bit political when Booth revealed an ‘unheard’ song in response to Trump, but we quickly came out of the gloom when they played classics such as ‘Come Home’, and the uplifting ‘Sit Down’ (😉) which got everyone over the moon and made for the best moment of the festival so far.

I say ‘so far’ because Lily Allen was next. The night’s headliner, Lily gave us everything from a lengthy listen to some songs from her upcoming album No Shame, to the hotly anticipated classics from our childhoods. She started her 18-song set with her most recent single, ‘Higher’, which announced the new Lily Allen sound: smooth vocals, with a vaguely electronic yet chill vibe. From personal songs such as ‘Lost My Mind’, to the feminist ‘Cake’, this album is definitely one to look out for. But if her sound has changed, she definitely hasn’t. Always her candid and caring self, she made sure to remind those in the mosh pit to look after themselves, jinxed the weather (she always has to kick up a storm doesn’t she), and thanked the crowd for having gone through a lot of unheard songs with her. It was all worth it though – ‘Smile’, ‘F*ck You’, and ‘Not Fair’ were an absolute blast to sing and dance along to, bringing the best and wittiest of 2000s pop right in front of us more than a decade later, the whole crowd cursing and waving their middle fingers with joy.

Check out more of our lovely photos below, and come back tomorrow for Sunday’s review!