I know the heavy winds couldn't be helped, but the site shutdown combined with cancellations and a site that was impossible to walk around made for a less than ideal end to the festival.

Sunday at Bestival had the potential to be incredible. With performances from Cakes da Killa, Loyle Carner and Justice planned, it should have been the ideal end to the festival. Of course, then the weather decided to get involved and change all of that.

We woke up to a message from Bestival saying the site was shut and they were doing all they could “to improve the ground in the arenas”. However, when it was open an hour later we finally handed in our bags of rubbish and recycling in exchange for the “Eco-Bond” – Bestival gave us bags when we entered to fill with rubbish and recycling and in return, we would get £10, the Eco-Bond being a litter surcharge. Easy enough to fill, but it was annoying that our campsite’s closest drop-off point was down one hill and up another, which would have been fine ordinarily but the mud made it pretty difficult. I think it’s a really good thing that Bestival have done, but it would be nice if they’d made it easier for people to drop off the bags. 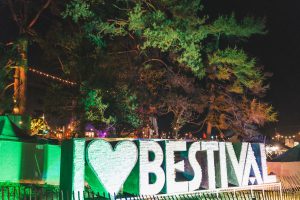 Exchanging £16 for the most incredible breakfast of vegan sausage sandwiches, bananas, tea and orange juice (I was beginning to fantasise about the tent next to us, I swore blind that they were making pancakes with bananas and strawberries on top), we checked out the Samsung HyperCube. We had been given VIP passes by them in the press tent which was super nice, meaning we bypassed the queue that people had been in for half an hour. Clad out in shoe covers, we entered a dark room and were told to go to the nearest Samsung Galaxy S8 to choose music tempo and lights. Then we were told to “Dance, groove and boogie” but we weren’t really feeling a boogie or groove after 4 days at a festival, so it was a little half-hearted. Five minutes later we were finished, encouraged to #ShareTheSound online, and I tried out their virtual reality headset which put me in the middle of a Royal Blood gig which was pretty cool, but I’m not sure if I would have queued for half an hour to do it. 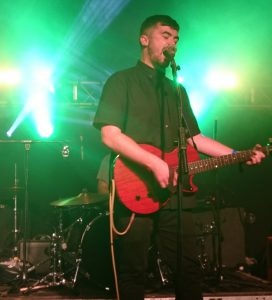 We then went to the press tent to catch up with everyone… To be told minutes later that we couldn’t leave. To be fair to Bestival, they were very good at keeping us updated via their app where they told us “Due to high winds and for everyone’s safety, the main area is temporarily closed.” They were sending people back to the campsites because of the weather (we heard in the tent that a speaker had blown over by the Castle Stage) and it meant that a load of acts were pushed back and cancelled. I completely understand that they had to put our health and safety first, and I’m glad that they did, but it just created a very wide vibe to the day, with a lot of people deciding just to go home because we had no idea when the site would reopen.

With Loyle Carner unable to play and Justice not turning up because of  “Production and technical issues beyond the band and Bestival’s mutual control”, the only thing we could do was wait for Seán McGowan‘s 6.00pm set on the Invaders of the Future stage. Predictably, he was amazing – they weren’t even sure if they’d be able to play and they lost their drummer for three hours, but his set was a really good mix of old songs and ones from his latest EP, Graft + Grief. Playing “Neverland”, “Costa del Solution” and “This Old Town”, as well as some new songs. The tent was surprisingly full considering the chaos of the day, and it was nice seeing him playing with a full band which I really think added something to his already fantastic songs. 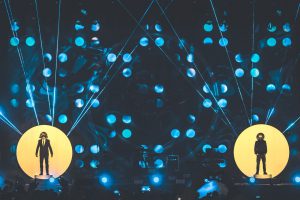 The final headliner was the Pet Shop Boys, described by Bestival as “One of the most enduring bands in pop“. Performing to a packed out Castle Stage crowd, they played ‘Pop Kids’ ‘Go West’ and their debut single ‘West End Girls’, complete with incredible new set designs and costume changes between songs and an “Always On My Mind” encore. We ended up making our way back to the car halfway through to avoid the amount of people who would be doing the same thing, but they really were fantastic.

What wasn’t as fantastic was watching the fireworks over the castle from the side of the road as we waited for someone from security to find us and help to change the wheel. With Cyril’s (our car) tyre absolutely fine in the car park, the road down to the campsite absolutely wrecked his wheel, giving him a flat and causing some awful scraping sounds. Though it’s too late to wish that the road had been fixed, that there was a different road or grids had been laid down, the security at the festival was absolutely incredible. They came within 20 minutes, had us driving within that time again, and the fireworks looked amazing in the distance. The people who work there must have put up with a lot that weekend (especially the lovely man at the JägerHaus who gave us never ending free drink tokens)  and they were just endlessly lovely.

Bestival 2017 really was an experience. The weather absolutely could not be helped and ignoring that for a moment, the artists that were there were some of my absolute favourites. We found a lovely tea stall (big up Mr Tea’s); talked with people who were giving tea for a donation to CALM, a charity who raise money to help prevent male suicide; tie-dyed t-shirts for £5 in the Ambient Forest; saw an amazing drum band outside the castle and a fantastic brass band walking through the Ambient Forest; took photos with the LoveBot; and although we didn’t go inside #HappyKanye, we saw him every time we were walking to and from the press tent – what more could you want?!

Check out the video below to find out what people enjoyed most from the weekend.