Fatman Scoop, Dizzee Rascal and Nadia Rose - what more could you ask for from this urban music-filled day? 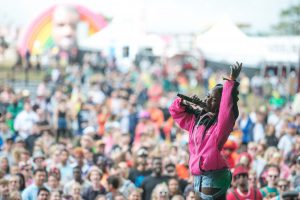 After finding the ultimate camping hack of putting two terrible airbeds on top of each other to make one acceptable airbed (or, I guess, you could just buy good airbeds in the first place but where’s the fun in that?) and waking up ridiculously late, I headed down to see Nadia Rose, an artist we tipped for big things at the start of the year, at her 12.55pm slot. Playing to a pretty full crowd, she played “Big Woman” and “Tight Up” with a lot of energy for that early in the day. It looked like such a fun stage to be on as her friends danced and sang with her the whole time – the set was full of so much energy, it was the perfect wake up call!

Fighting the rain to get backstage to interview her and Wild Front followed (as well as meeting Rag ‘n’ Bone Man which was ridiculously exciting) – although unfortunately, this meant missing The Tuts 4pm slot on the Invaders of the Future stage, which was disappointing because they’re pretty incredible. I heard amazing things about their set, as well as Disney Rascal who plays punk/reggae versions of Disney songs – possibly the only way to actually enjoy Disney music… 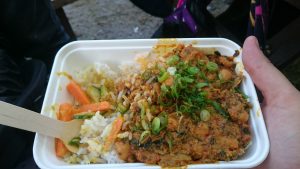 It was after this that we explored the site a bit more, coming across a tent called the Feast Collective, which sold a variety of food including an incredible vegan curry from Indonesian Coconut Curry – £8 for rice, curry, a cucumber/carrot side, spring onions and chilli but it was worth every penny (and they were lovely enough to knock some of the price off because I promised to write about how amazing their food is!)

With a couple of hours to wait between our late lunch and Fatman Scoop, we went to the JägerHaus where an incredible band called The Fedz were playing. Describing themselves as “A UK/US music collective from all races and backgrounds… sticking up a middle finger to the status quo.”, they did a fantastic cover of ‘Teenage Dirtbag’ as well as some of their own material. Musically astounding with flawless vocals, I’m very glad I stumbled across these guys.

Soon it was time to traverse the still lethally muddy site to Fatman Scoop, who was on HMS Bestival – I really don’t think there could be a more appropriate stage for him. Remixing both his own songs and others, it looked like a giant party on that boat and everyone went crazy for possibly his most well-known song, “Put Your Hands Up”. Putting my hands up despite not even having a $10 bill, he just has this incredible talent of making every song sound like a Fatman Scoop song with his distinctive vocals – I mean, a Fatman Scoop set was always going to be ridiculous and incredible, and I’ve been looking forward to him ever since our Head of Relations tweeted a short video of him at Common People taking his shirt off. He was amazing, even if he did risk many people’s cleanliness by telling us to “Jump! Jump! Jump! Jump!” 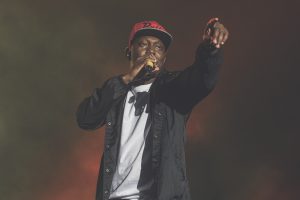 We left Fatman Scoop after only 20 minutes to get to Dizzee Rascal, who drew one of the biggest crowds of the weekend. I’ve spent years wanting to see him again since seeing him at Glastonbury in 2009, and he definitely did not disappoint. Ever the performer, he put on an incredible set, kicking off with “Fix Up, Look Sharp” and “Jus’ a Rascal”. Later in the set he played “Bonkers”, “Holiday”, a remix of Florence and the Machine’s “You’ve Got The Love”, and “Bounce”, as well as remixing songs by other artists – but sadly, no “Hype“. This was by far one of the best performances of the weekend, as Dizzee Rascal proved yet again what a fantastic performer he is, and how good he is at putting on a show. 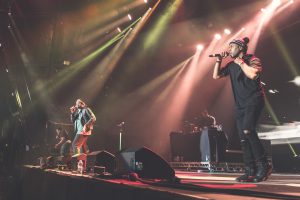 I have to mention A Tribe Called Quest, because their final ever show was their 10pm set on the Castle Stage. After 27 years, Q-Tip said “We suffered a blow… We lost our boy Phife Dawg. This is gonna be our last show as A Tribe Called Quest, ever.” in the middle of “Whateva Will Be”. Playing “Oh My God”, “Dis Generation” and “Moving Backwards”, the set also had solo performances from remaining members Consequence, Jarobi and Q-Tip. Ending with “Award Tour” and multiple plays of “We The People…”, it was a fantastic final show.

Following this was a 3-hour wait in the press tent for Charlotte Church’s Late Night Pop Dungeon – yes, you read that correctly. All I wanted to do from midnight was go to bed but I knew I’d regret not witnessing something with this incredible a name. Church and a ten-piece band came on stage at 2.30am, playing “Get Your Freak On”, “Get Off” by Prince, and I heard rumours of “Killing in the Name” and the theme from E.T. I can’t verify these because I left for bed at 3am, but from what I saw there’s no doubt that she has an incredible voice. Every song from every genre that she sang was amazingly well done – sorry for not staying later Charlotte, but your pop dungeon really was something.

Do festival-goers prefer the Isle of Wight site or the new site? Find out below.