An incredible line-up + one of my favourite bands playing + minimal mud = the best day of the weekend.

Waking up after the windiest night ever (we were in Rainbow Rave and worried we’d blow into the Emerald City!), we went to the press tent for a while to refresh and recharge – both our phones and ourselves. With adorable bunting, plug sockets, and an outdoor seating area, we plugged our phones in before taking advantage of the free water, Jimmy’s Iced Coffee, and programmes. After planning out far too many artists to see and knowing we would not have enough time to see them, we made our way to the Castle Stage next door to see The Ohmz. 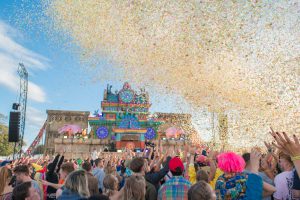 I saw them supporting The Skints back in Independent Venue Week at The Joiners, and the reggae/ska band were just as good seven months down the line. With a slightly (!) bigger stage this time around, they drew an impressive crowd for their midday slot and played fan favourites ‘Gun Violence’ ‘Positivity’, the latter being the title track of their upcoming album and being about spreading positive energy and positivity – a typical reggae sentiment from a fantastically talented reggae band, and I for one will definitely be keeping an eye on their social media for more news about Positivity!

Afterwards, we had a mad dash backstage to interview The Ohmz. Being from the Isle of Wight, Bestival’s original home, there was a lot to talk about regarding the move and the south’s music scene. Some mingling in the tent followed, as we waited until 3.30pm for Soul II Soul to perform. This was a very Castle Stage-heavy day, but there was no way we could miss Soul II Soul! They were absolutely incredible, playing ‘Back to Life’ and ‘Get a Life’ but with not much time for all of their best songs because of the insultingly short time they had to play. Fronted by the astoundingly good Caron Wheeler, they sounded exactly how they did from recordings 20 years ago. Though Wheeler seemed to have some problems with her earpiece, especially at the start of ‘Back to Life’, which made me think she couldn’t hear herself properly, eventually it was all resolved. Incredible band, amazing performance. 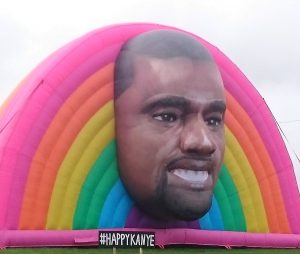 With some time to kill until Ray Blk, I had a fantastic burrito and witnessed one of the Cuban Brothers wearing nothing but a g-string (I’m still not sure how I feel about it) before heading to the JägerHaus for some more free drinks (thanks Jäger!). We also checked out #HappyKanye, who had “something inside for you to touch” – I didn’t go inside him because I think it involved taking wellies off, but apparently it was all a big metaphor for his ego. I’m still wondering if he knew about it… 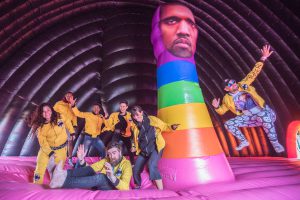 Suitably tipsy for Ray Blk, we were surprisingly close to the front for the size of the crowd that she drew as she put on one of the best performances I saw all weekend. She looked like she was having a ridiculous amount of fun as she sang ‘5050’, a cover of ‘Killing Me Softly’, ‘Hunny’ and ‘Baby Girlz’. Still a crazily short set for the amount of talent she has, but between songs she’d talk about the importance of loving yourself and your family, telling us to “make some noise if you love who you are if you’re proud of where you come from” and to “fuck anyone else’s opinion”.

We waited around the stage after her set for Wiley, who was meant to be on straight afterwards, but he ended up being a no-show and Oxide & Neutrino filled in for him at the last minute. Considering the minimal amount of time they would have had to prepare they were fantastic – if a bit of a weird choice to have on before The xx – playing remixes of ‘Bonkers’, ‘Show Me Love’, ‘Rewind (When the Crowd Say Bo)’ and ‘Fill Me In’. Admittedly, I did spend some of the set confused because I think I was expecting a different kind of performance from them, not realising it would be remixes of other songs with rapping from them over the top of it, but it was a super fun set and one of the best sets of the weekend. 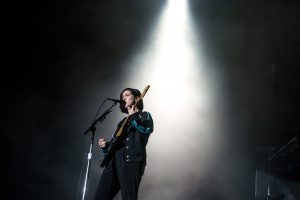 The final act that we saw on Friday, despite trying to stay up for Craig Charles’ Funk N Soul Club and Clean Cut Kid but definitely not being awake enough for the 1am and 3am sets, was The xx. They were the first band I saw advertised to be playing here, and from then on I knew I was going to be at Bestival to see them play – and they of course did not disappoint. Opening with ‘Intro’, because what else would they open with, and ‘Crystallise’, this set was really the first one to show off what the lighting at Bestival can be like. With lasers flying across the stage and crowd, visible in the air and the castle lit up and pulsating, it was almost as good as their Brixton dates in March (if only they had been able to bring the mirror ceiling to Bestival to go over Jamie). 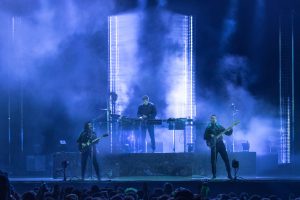 Continuing with ‘Say Something Loving’ ft. an extra long intro, a ‘Dangerous/I Dare You’ mashup and some older songs like ‘Infinity’ and ‘VCR’, they took some time to talk between songs about their love of Bestival and how much they love being there. They had a couple of mistakes, one from Jamie not doing something he was meant to and another from Romy as her voice cracked at the start of ‘Performance’, which must have really thrown them off inside but they just restarted and continued as if nothing had happened – and as my mum commented afterwards, it showed they were artists actually performing and not relying on background music and vocals. They even had a moment for Jamie to do a DJ set in the middle where he sampled a bunch of their songs, before launching into ‘On Hold’ and ‘Angels’ to end the show. It was clearly an emotional one for them, with Oliver running on stage to hug Romy after ‘Performance’ and all three of them looking overwhelmed and teary at the end (and pretty emotional for me too!), as Romy told the crowd “I want you to know that we see you and we love you”. After their incredible set, I really cannot wait until I can see them live again.

Check out Bestival’s promo video for this year’s festival below.