Though what I saw was amazing, I wish there'd been more on a bit earlier in the day with fewer breaks between sets, though it was understandably quieter than the rest of the weekend!

Having been set on going to Bestival ever since I found out that The xx were playing there, I don’t think there could have been a more excited person on that site on Thursday. Arriving at midday with my mum to a very well organised car park and ticket collection gate, we got talking to some tent-neighbours who only came because they thought it was on the Isle of Wight still and convinced them to pump up our air beds with their foot pump while we made the most of the sun and drank half a box of wine.

Of course, this was the first year of the new site and it was half the size of what it used to be on the Isle of Wight, from 80,000 people down to 40,000. Though hilly and unimaginably muddy, it was a lovely location next to Lulworth Castle with only minimal noise from the nearby Army Barracks. 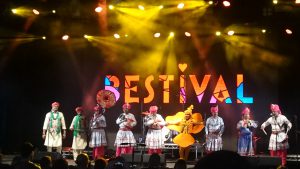 After setting up our tent, glittering our faces up, and exploring some of the site including locating the press tent, we made our way to the opening ceremony in The Box. We first met three lovely Indian men in traditional dress, one of whom was dressed as a horse and seemed very excited about it, who were involved in a very good Indian brass band who kicked off the festival. Following them was a band called Princeless, all dressed as Prince did in some of his most well-known music videos, playing incredible cover versions fronted by a man who sounded just like Prince – it was really quite impressive. 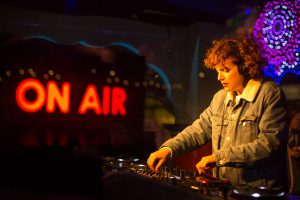 Unfortunately we couldn’t stay for their whole performance because Annie Mac, who has been to every single Bestival ever except for 2016, was doing her Radio 1 show live on the Temple Stage at 7pm, featuring a fantastic acoustic set from Circa Waves, a performance from the amazing Ray Blk and the first appearance of the World’s Largest Confetti Cannon – they really weren’t joking about it being the world’s largest because it covered the site, with a firing range of 30 metres! Also, fun fact: every piece of confetti coming out of it was individually numbered by Annie Mac and Rob da Bank, according to their official programme. I’m beyond glad that she had Circa Waves and Ray Blk on her show because not only were they amazing, but I was unable to make it to their full sets across the weekend because of clashes or interviews so it was great to be able to see them, even if they were only on for 20 minutes.

After Ray Blk’s set, we made our way to Jagerhaus, a Jäger bar in the middle of the site. They had a bar upstairs called The Loft which was invite only which they were kind enough to invite us to, which overlooked their stage and had free drinks, a pool table and table football. With incredibly comfortable sofas and a seemingly endless supply of alcohol, we relaxed there for a couple of hours until we went back to the tent. Made to look like a hunting lodge, the wooden floor and cushions on the sofas made a nice change to being outside, and the free drink tokens given to us by security meant that we had no reason to stop drinking their cocktails, featuring Black Spice (Jäger, Pepsi and a squeeze of lemon) and Deer and Beer (Heineken with a shot of Jäger). They had live music and DJ sets downstairs at the general entry bar/garden every day from midday (4pm on Thursday) and a spectacular view of it from The Loft. 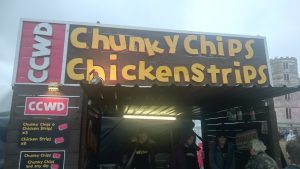 However, before going back to the tent we had to eat – and our food outlet of choice was Chunky Chips, Chicken Strips. With very respectable prices at £3 for plain chips and £4 for chips with a topping, we went for chips with curry sauce and they were incredible. Not only was their food amazing, but the people who ran it (Francesca, Rich, Ashlee and Conor) were kind enough to give us discounted and free food – but only after we realised how great their food was in the first place!

Check out the video below to see The World’s Biggest Confetti Canon blast during Annie Mac’s set.