The annual bank holiday weekend Electronic Dance Music festival in Clapham Common, London proved to be an amazing blend of differing EDM genres with a quality that other festivals just can’t compete with.

Sunday at SW4 featured more EDM hard hitters and a remarkably strong main stage to round off the two-day festival.

Sub Focus ‘live’ (more on that in a minute) combined his latest album of chart EDM songs with some heavier baseline tracks thrown in in a fast paced and exciting set. Dubbed as his ‘live’ set, opposed to a DJ set, I was expecting a few instruments, or at the very least a live singer, but actually it turned out to be aka Sub Focus at a DJ set with a side electronic drum kit (used sporadically) and an MC geeing up the crowd as best he could, of which in fairness was largely successful due to that aforementioned blend of known songs and some almost filthy baseline based tracks. In terms of the latter, ‘Lingua’ stood out as the best of Sub Focus’ latest offerings. My favourite track of the set was actually one of Sub Focus’ oldest, the moshpit-inducing ‘Rock It’ from his self-titled debut album of which went down a treat in the afternoon sun. A head turning set concluded with ‘Tidal Wave’, aptly summing up the hour of drum & bass. 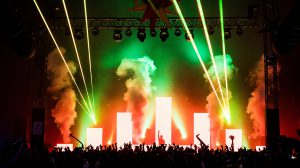 Now firstly, anyone who knows me knows I may have a slight (!) thing for Knife Party and therefore was incredibly excited to be seeing the duo again. An hour of frenetic drops and heavy strobing was on the cards, and everyone in the crowd was licking their lips in anticipation of what was to come, and the duo from Pendulum didn’t disappoint. Their music isn’t for everyone, for example, I saw them a couple years ago at a festival in Portsmouth amongst artists such as Katy B and Snoop Dog and the crowd seemed to not really know what was going on – this, however, was different, with an adoring crowd adding to an already eclectic set. ‘LRAD’ was a personal highlight, along with a remix of Swedish House Mafia’s ‘One’, with ‘Bonfire’ ending up being the main source of my post-SW4 bruises in a wild finale.

Opening with the eerie ‘Imaginary Friends’, the infamous Joel Zimmerman aka Deadmau5, reigned king around Clapham right from the beginning, with his trademark mouse alias standing out for all to see. The stage was by far the most elaborate of all the artists at this year’s festival, with Deadmau5 aboard a giant LCD screened cube of which showed a variety of different animations and images linked (apparently) to the music blasting around the common. I suppose it was naive to assume the videos would much sense amongst us mere mortals considering songs such as ‘Three Pound Chicken Wing’ and ‘My Pet Coelacanth’ are part of Deadmau5’s armoury. The accompanying light display was truly epic, complimenting the unique progressive house on show. 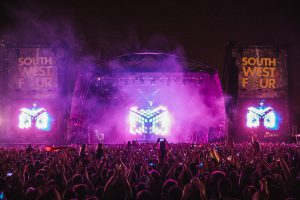 A personal highlight was the track ‘Ghosts n Stuff’ (my favourite dance track of all time nonetheless) of which lifted the tempo and sounded absolutely fantastic with the heavy bass reverberating amongst thousands of excitable attendees that had clearly saved enough energy throughout the weekend for this 90-minute master class to round off SW4. The cube featured the Deadmau5 ‘head’ superimposed onto to various brightly coloured and quirky animals dancing to the heavy bass line of the Rob Swire vocalised track, potentially providing fuel to the fire that Zimmerman doesn’t confine to EDM commercial convention and is a truly unique artist in his own right. ‘That euphoric one’, as described to my brother and later realised has an actual name (‘Avaritia’), proved to be impossible not to foot tap and provided a slight reprieve in the crowd bouncing around. The majority of Zimmerman’s music can be more than five minutes long, so it was a slight shock to have the punchy and rap-ridden two-minute ‘Legendary’ which, whilst his newest single was quite catchy, seemed very out of place in the middle of his set.

In total, five of Deadmau5’s latest album ‘W:/2016ALBUM/‘ were played at South West Four, but of them all, none had quite the impact that ‘No Problem’ did on the adoring crowd. The song itself follows a similar trend to others on the album, with that underlying 80s space fantasy vibe running throughout, however, the accompanying videos showed the recently viral Rocket League video game being played simultaneously. A very bizarre few minutes indeed, although very memorable (maybe that’s the point, subconscious marketing? I wonder..).

Ending South West Four 2017 with the irrepressible Strobe was an incredible sight, albeit very different to how the previous night ended with heavy drum & bass from Pendulum, with Deadmau5 preferring the slow building and euphoric nature of his signature track. I was a little surprised to see Deadmau5 headlining, not due to a lack of talent at all, but due to his style of music making me a little weary of how it would sound at the end of the festival – especially after the loud and brash Knife Party before – however his performance exceeded my expectations and capped a brilliant weekend of Electronic Dance Music.