With a charming atmosphere and gorgeous weather, performances from Jerry Williams and Stereophonics made for a lovely Saturday.

Last Saturday, crowds of all ages gathered at Southsea Common in Portsmouth for a festival like no other. Victorious is a festival for everyone, and this year, it did not disappoint.

By midday, both the Common stage and Castle stage were already busy with families enjoying the vast range of food on offer, sat by the castle encased within the grounds. Food highlights included the juicy burritos from Flaming Cactus and the only place fighting the epidemic of festival PDA: The Garlic Farm. Victorious 2017 was certainly foodie heaven.

If the food wasn’t enough to tickle your festival taste-buds, myriad retail stores lined the walkway leading to and from the Castle and Common stage. Festival-goers could get their hands on beautiful vintage clothing, jewellery, arts and crafts or pose for a photo and get a personalised keyring. Mini performance areas along the walk way kept the music going no matter where you were and allowed local artists to reach an audience they wouldn’t have otherwise been able to get. In previous years, artists performing on these much smaller stages would be promoted to much bigger stages the next year following. Jerry Williams, for example, played a very small stage along this walkway last year, and this year she played both the Rhino Acoustic Stage and the Castle Stage.

While Saturday’s line up was particularly impressive, Victorious offered music lovers the chance to see more than just the main acts. Multiple stages blessed the Southsea Common grounds. The Seaside Stage offered a beautiful coastal back drop and the Rhino Acoustic Stage offered festival-goers a welcome break from standing up with rows of a hay bales to sit on. The acoustic stage often had bands performing covers that drew huge crowds – one band’s rendition of ‘Mr. Blue Sky’ evidently pleased some day-drinkers. 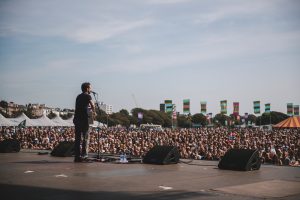 At midday, Frank Turner’s eclectic mix of fans waited eagerly for his guest acoustic set, starting off the main part of the weekend with an epic strum of his guitar. Turner’s set paid homage to Hampshire, his home county and the festival’s location, earning yells of approval from the crowd and disappointing after mentioning his upcoming Southampton gig. Turner, acknowledging the Southampton/Portsmouth rivalry, expertly encouraged a feeling of love rather than hate saying ‘At the end of the day we’re all from Hampshire’.

Local artist Jerry Williams was another early highlight on the Castle stage, pulling out ground-shaking riffs and funky dance moves. As a Victorious veteran and hailing from Portsmouth, Jerry knew her crowd and the stage, rocking a bigger stage than she’d ever had before at this event.

Back on the Common stage, The Hunna earned a far bigger audience than anticipated and forming one of the first mosh pits of the weekend. A promise that they’d come out to meet their fans afterwards was followed by high pitched squeals from teenagers, who made up a fair amount of the crowd. Fans scrambled to grab a sweaty rag and drum stick chucked into the crowd proving the band’s rapid rise to fame within the space of a year is no joke. 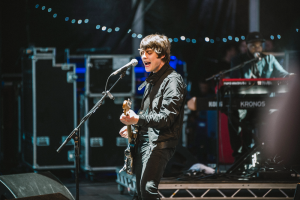 Towards the end of the evening, and earning a slightly older audience than that of The Hunna, eccentric northerners, Maximo Park, embraced their sunset slot and had the crowd on their feet. They played some huge crowd pleasers such as ‘Books from Boxes’, ‘Girls Who Play Guitar’ and ‘Apply Some Pressure’.  Once the sun had gone down, Jake Bugg warmed up the festival-goers for Stereophonics and he even had his very own ‘lighters in the air’ moment. 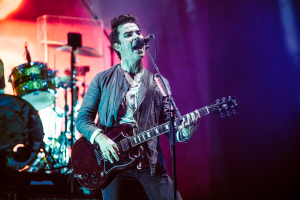 Stereophonics certainly delivered as the day’s headline act with a setlist that meandered from well-known hits such as ‘Have a Nice Day’ and ‘Dakota’ to lesser known album tracks for the bigger fans in the audience. The set was littered with guitar solos and big built up song finishes and lead singer, Kelly Jones, even performed a solo rock medley including AC/DC’s ‘Highway to Hell’ and Bruce Springsteen’s ‘Dancing in the Dark’. Aside from this, the set lasted over an hour – a little too long for this band.

Overall, Saturday of Victorious Festival 2017 did not disappoint, the food was excellent as was the line-up. However, I certainly felt an air of heightened anticipation for Sunday towards the end of Saturday evening. While the line up was good, I certainly felt that the organisers had arguably saved the best for the final day.