Saturday was a day packed with a variety of acts that everyone could watch.

Saturday, thankfully, was home to some clouds in the sky meaning that scavenging for shade from the sun’s relentless heat wasn’t as much of an issue as it was the day previous. The first day to sell out, the arena was buzzing with excitement for Eminem’s headline set that evening. Sadly, Reading was not showing the McGregor vs. Mayweather fight that evening; however, it did not stop chants in support of McGregor echoing around the arena all afternoon. 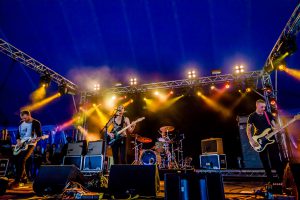 For me, Saturday kicked off excitingly with a secret set from Wolf Alice on the Festival Republic stage. The tent was not as full as I expected to begin with, but as the set progressed, more people heard the rumours and eventually we were stuffed in. Whilst the excitement and atmosphere inside the tent were great (shout out to the stewards that had abandoned their posts temporarily), singer Ellie’s vocals were drowned out by the music of her band, making her harder to understand. Luckily, the audience seemed to sing every word along with her, thus the lyrics weren’t completely lost.

We then moved on towards the BBC Introducing Stage where Too Many T’s were performing and had gathered quite the crowd. People of all ages were getting involved with their hilarious back and forth old school hip hop, helping everyone get over the hump of Saturday morning. 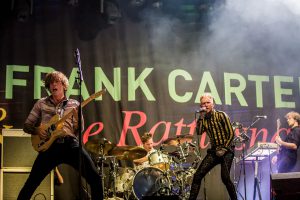 The award for the highlight of Saturday for me goes to Frank Carter and the Rattlesnakes, who performed on the NME/ BBC Radio 1 stage that afternoon. The energy he brought onto the stage was electric, enticing all the crowd to get involved. The raw emotion that came through his lyrics made you truly believe every word he was singing, and sadly, his set only lasted half an hour. Towards the end of his set, he made a point of addressing sexual assault at gigs, encouraging women to crowd-surf, as his audience is a safe environment for women to enjoy themselves. Naturally, bodies came piling over our heads as girls got involved like I’ve never seen before. Frank finished his set by bringing out his young daughter, who was tucking into her apple looking fairly unfazed at how cool her dad is.

Over at The Pit, I had to go and see how Cardiff based Astroid Boys were getting along, and I was pleasantly surprised. Having only ever seen them in small local venues in Cardiff, it was lovely to see them having such a great reaction from a full tent. Back on the Main Stage, nu metal band Korn had just begun, it was their first time at the festival and I was intrigued to see how the response would be, especially as some of the crowd were Eminem fans that had been waiting all day. Full of tricks, Korn did not disappoint. Frontman Johnathan came skipping onto the stage, literally, before launching into a track off their newest album Rotting in Vain. The crowd were full of energy throughout their set, kept alive by surprises such as their cover of Queen’s ‘We Will Rock You’ and Johnathan’s bagpipes. Thanking the crowd and teasing at a possible upcoming tour as they exited the stage, the crowd were left on a massive high ready for Major Lazer.

Eminem undoubtedly had the biggest audience at the Main Stage on Saturday night, rebuking arguments from critics that he doesn’t ‘fit in’ at the festival. With additional lights surrounding the Main Stage, and a boom box manufactured as a set design, fans could not help but feel excited about what they were about to see, especially as Eminem doesn’t allow his sets to be recorded, meaning we were the only ones to experience his performance that night. Finally, introduced by MC Mr. Porter, Eminem graced the stage and launched into an onslaught of hits. One thing I think a majority of the crowd weren’t expecting was the full live band on stage with the rapper, adding texture to the performance that lacks for other artists. Eminem also took the time to ‘not get political’ as he led a chant of ‘F*ck Trump’ with the crowd as he launched into track ‘White America’, and later returned to the stage in a shirt with the words ‘Fack Trump’ written boldly across the front. Eminem, of course, packed the sets with hits including ‘Kill You’, ‘Stan’ and ‘Detroit’, however, he made the crowd wait for the classics such as ‘My Name Is’, ‘Lose Yourself’ and ‘Not Afraid’.

Unfortunately, the fireworks planned didn’t start going off until the stage was empty and the crowd was leaving, however, the crowd stopped to enjoy them before continuing back to their tent with chants of ‘F*ck the Mayweather’ before the fight that evening.