With a beautiful day, surprises from Kasabian, Lethal Bizzle and Queens of the Stone Age, there weren't enough hours in the day.

The sold-out Reading Festival was greeted on Friday morning by a sweltering heat that would accompany the whole weekend, unlike its twin festival at Leeds. Having a majority of the attendees begin setting up camp on Wednesday, hangovers were forgotten as the festival was buzzing with excitement for the music to begin.

Having arrived on Thursday afternoon, I purchased my lanyard with the stage and set times for the weekend ahead. Immediately I had noticed a gap on the NME/BBC Radio 1 stage on Friday evening, and began trying to identify the mystery act – this became one of many surprise appearances at the bank holiday festival. 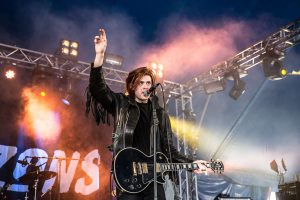 However, Friday kicked off for me at a very crowded Festival Republic stage for The Amazons. Despite arriving early, I just managed to squeeze into the tent to escape the relentless heat of the sun, to be greeted by an almost equal temperature inside. As they emerged onto the stage, the crowd went mental, whilst others ran through the field towards the stage, reluctant to miss a second more of the set. The half an hour set was concluded with their hit single ‘Junk Food Forever’, which could just be heard over the crowd singing every word and guitar note they could fit in.

I remained in the Festival Republic tent to hear Louis Berry’s set, and I was so pleased I did. Whilst the tent was significantly less packed after The Amazons, a keen crowd excitedly awaited the Scouser’s arrival. Despite having never heard him before, I was left wishing I could sing along as passionately as the rest of the crowd were; however, it didn’t stop me jubilantly dancing along throughout his performance.

Following the upbeat set, I moved onwards to the Main Stage, where Mallory Knox was deep into their set, and performing very comfortably in front of the large crowd that had gathered before them. The band managed to transfer their energy to the crowd as people jumped, moshed and crowd surfed as if the temperature wasn’t in its mid 20’s. Ratboy followed the alt-rock band drawing in a huge audience, especially considering he has only released his debut album SCUM exactly two weeks before his appearance. 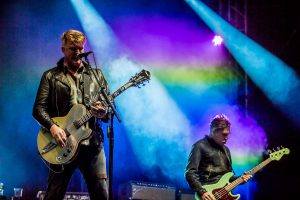 Having guessed the night before that the secret set was that of Queens of the Stone Age, with a poster in the main arena confirming so, we arrived in the NME/BBC Radio 1 stage early in hopes of grabbing a good spot.

We arrived so early in fact, that we caught Tory Lanez in the midst of a very exciting set that had packed out the tent. Now I did not know one song of his, nor was he the genre of music I typically listen to, however, the energy from both him and the crowd meant I enjoyed it thoroughly. I have seen many live acts before, however, I have not seen 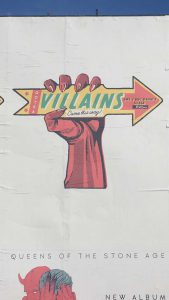 any that have come close to the intimacy he had with his audience. Having announced doctors had advised him to not perform that night, he proceeded to climb onto the barrier, then into the crowd, enter a dance circle before crowd surfing around the entirety of the tent.

Disappointingly, Queens of the Stone Age were fifteen minutes late onto the stage, meaning I only had the chance to catch four songs before returning to the main stage for Kasabian, however, those four songs were euphoric. Bouncing onto the stage with ‘No One Knows’, all tardiness was forgotten and the crowd went nuts, including me. After hearing their single ‘The Way You Used To’ off their new album Villians, we headed to the main stage for the night’s concluding performance.

The headliners of the Main Stage on Friday night were Kasabian. Having cancelled their gig ten minutes before they were due to appear on stage in Belfast, just three days before, with frontman Tom being hospitalised for ‘severe vomiting’, the crowd were an unsettling mix of excitement and anxiety. 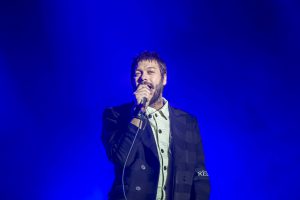 However, Kasabian captured those feelings with a rising heart monitor sound racing as they burst onto the stage with ‘Ill Ray’ from their newest album For Crying Out Loud. Whilst Tom was obviously physically not up to his normal self on stage, he was not afraid of the spotlight to be on him (literally), and he was vocally flawless. He announced to the crowd that he was ‘back from the dead’ and raced into an onslaught of hits, including beginning a chant of ‘Eez-eh’  before leaping into the song with their mash up of Daft Punk’s around the world. As the crowd built with energy, Kasabian did too, with Sergio immensely helping the frontman keep the excitement alive. The highlight of the set, however, had to be during the encore when they bought out Noel Fielding, a friend of the band, as their special guest, reprising his role of ‘Vlad the Impaler’ onstage, but not forgetting a cheeky plug of his new gig presenting on Bake Off before he left. Then before we knew it, that was day one over, and what an amazing day it was.