A truly incredible end to an amazing weekend, 2017 marked the spectacular demise of one of the most loved festivals in the UK.

Reaching the final day of Secret Garden Party, I was feeling both excited and sad.  Excited for the acts playing that day, as they are some of my all time favourite artists, but sad that the festival was finally coming to a close and wouldn’t be happening ever again.  Though part of me was looking forward to returning to a warm shower and proper bed, as the festival site was looking more like liquid than land at this stage.

Similarly to the previous day, the weather was pretty grim, so I wanted to meticulously plan ahead to avoid the rain as much as possible.  I headed back to Chai Wallahs for a little while, where a five piece band called Me And My Friends were performing.  It was an interesting lineup of instruments, featuring a cello, guitar, bass, drums and clarinet, and was a kind of jazz hybrid genre of music.  Whatever their songs could be classified as, it was funky and feel good, ideal for the rain that it accompanied.

Following this, I wanted to see some of BBC Sound of 2017 winner Ray BLK’s set, so ventured to the Great Stage.  Her performance started in the sunshine but dark clouds quickly descended but that didn’t put people off staying to watch the London based singer-songwriter.  I didn’t know any of her songs prior to seeing her but thoroughly enjoyed what I did see; the mixture of her smooth vocals alongside her rapping was a unique combination, and clearly, one that has made her and her music popular. 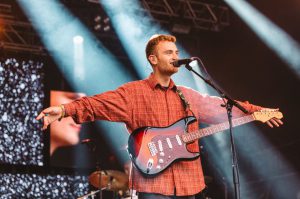 Up next was one of the artists that I’d been looking forward to the most, and he ended up being the best thing I saw all weekend.  British singer-songwriter/producer/DJ Tom Misch played that magic 6 o’clock slot and even brought the sun back with him – very fitting considering he played his track titled ‘Sunshine’.  Noting the change in weather, Misch commented, “I’m so glad it’s not raining for this set.”  I think everyone agreed with him there.  Playing tracks from his EPs and both Beat Tapes, Tom Misch provided perfectly mellow vibes for a Sunday evening and drew a significant audience.  Many of his songs feature strings, so he even had a violinist on stage with him.  Fellow festival performer Zak Abel joined Misch on stage to perform ‘Beautiful Escape’, which had everyone dancing, and his track ‘Watch Me Dance’ was a fantastic choice to close his set with.  My only criticism would be that I wish he’d played for longer. 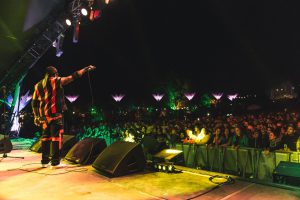 As the sun set over the mud of the final Secret Garden Party, I was disappointed that this was the first and last time that I would ever attend such a wonderful festival.  Aside from the brilliant lineup – which was very supportive of up and coming artists as opposed to huge names – the atmosphere of SGP was something that I hadn’t encountered before.  I don’t think I’ve ever attended a festival where I saw so much nudity, glitter and outlandish outfits because it was encouraged and explored by everyone there.  I wished I’d brought more sequins with me.

The final headliner of the weekend was Jamaican group Toots and the Maytals who formed back in the 1960s.  I only saw the first half of their set, but I could see that it was very well received by everyone, and their uplifting reggae music didn’t leave a single person standing still.  I think they were a slightly unusual choice for a headline act, as their songs aren’t something that can be easily sung along to, but that didn’t seem to matter to the remaining festival goers. 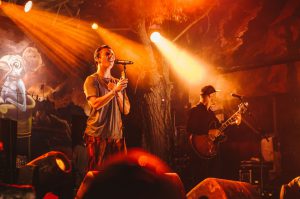 Departing Toots and the Maytals, I rushed to the Where The Wild Things Are stage to watch Zak Abel, one of my most loved artists right now.  I’ve seen Zak Abel perform a few times, but never in a festival environment so I was really interested to see how people would respond.  Near the start of his set, he said how SGP was his “favourite festival last year” and he thought that this year it could be the same.  Despite not having released his debut album yet, the audience watching Abel was fairly large and seemed to relish all of his songs and there was plenty of people joining in with his sultry vocals.  He played a brand new track, ‘Stay With UUU’, which was apparently the first time he’d ever done it live. There was also a cover of Drake’s ‘One Dance’ and a mashup of Pharrell’s ‘Frontin’ with his own track ‘Say Sumthin’.  To be concise, it was a wonderful set to close the weekend.

Overall, Secret Garden Party was a truly magnificent event and one of the best festivals that I’ve ever attended. There was a real sense of liberation and inclusion there, and it’s a garden party that undoubtedly will be missed by all those who have attended it over the years. May its legacy live in forever – because it really is one Serious Party.